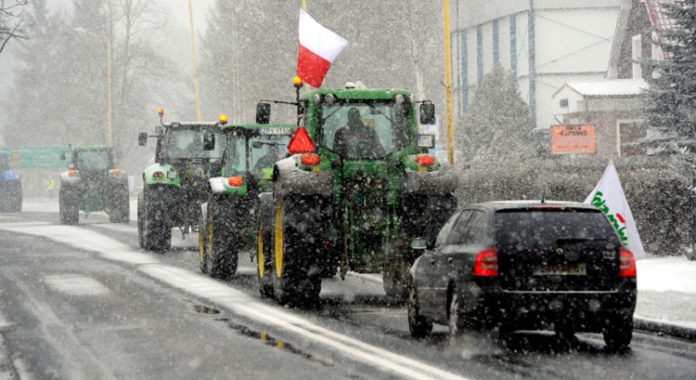 Poland is witnessing country’s biggest ever farmers’ protest. In February, thousands of Polish farmers in 150 tractors blockaded the A2 motorway into Warsaw. This is March, but the protesters have refused to relent and are adamant that legislators pay attention to the important issue of food sovereignty in Poland. All that the protesting farmers want is land rights, ban on GMOs, protection of small farmers from companies like Monsanto, and legalisation of farm food sales.

The four key demands of the farmers are:

Rallies and blockades have so far taken place in over 50 locations across the country involving thousands of small and family farmers. “We demand a legal ban on GM crops in Poland. The value of Polish agriculture, unique in Europe, is the unpolluted environment and high quality food production. That’s decisive concerning our competitiveness in global markets,” said one protesting farmer, while another added, “We demand the introduction of legislation that will protect Polish land from exploitation by foreign capital! Agricultural land cannot be sold to commercial companies. It’s part of Polish territory. Once sold it will be lost.”

A basket of ‘illegal’ farm foods was taken to the Prime Minister’s office, while a table was set up outside to display these items and highlight the absurdity of Polish agriculture laws. “We are ready for dialogue. We look forward to meeting with you, Prime Minister, and beginning a comprehensive government commitment to solving the problems of Polish agriculture. If you do not enter into a dialogue with the Union, we will be forced to step up our protests,” said Edward Kosmal, chairman of the farmers protest committee for West-Pomeranian Region.

Julian Rose, President of the International Coalition to Protect the Polish Countryside (ICPPC), explained, “We are witnessing a sharp escalation in activity by Polish farmers squeezed by EU, government and corporate interests. These protests are touching the raw nerve of what’s wrong with the inhuman, neo-liberal and profit obsessed practices of today; Practices which ignore the real needs of farmers and consumers alike.”

Jadwiga Lopata, co-director of the ICPPC, added, “The health and welfare of the nation depends on consumers and farmers having access to traditional seeds and good quality food. The Polish government does not accept this and is destroying the roots of Polish agriculture by listening to corporations rather than the Polish people.” The farmers vow to continue the protests until the government agrees to talk with the union and addresses the crisis in Polish agriculture.