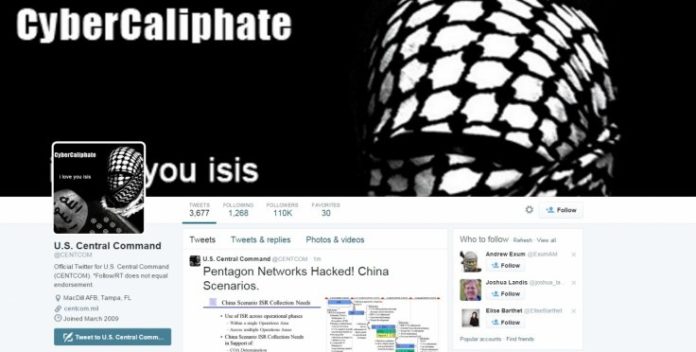 On January 13, just as President Barack Obama was speaking on cyber security, Centcom’s Twitter account and YouTube channel were compromised for 30 minutes and defaced with pro-Islamic State (ISIS) messages and threats against US soldiers.
The Federal Bureau of Investigation is now using information tweeted by Anonymous to help it find the hackers which it earlier believed belonged to CyberCaliphate, the hacking wing of ISIS. Anonymous claimed that the attacks came from inside the US – from the state of Maryland and not from the Middle East. The group added that it didn’t appear that the attackers were using proxies to try and hide their real location.

We’ve traced the hacker who infiltrated @CENTCOM to somewhere in the State of Maryland. @FBI, you’re welcome.

BREAKING— #CyberCaliphate‘s Identity (One we know of): NAME: Junaid Hussein Age: 20 Background Check: 6 months in jail for prior hacking.

On January 16, a memo from the FBI forwarded the IP addresses to several security experts to verify the reliability of the information with the help of the data possessed by the experts.

“On 12 January 2015, at 2:01PM CST, @TheAnonMessage, a Twitter account associated with the Anonymous hacking group, tweeted 11 IP addresses involved with the CENTCOM hack with the message. The FBI is providing a list of IPs obtained from @TheAnonMessage Twitter Account, and encourages recipients to examine their networks for any activity related to these IP addresses”.

The FBI has in the past tracked, arrested and imprisoned multiple members of the hacktivist group, including Americans Barrett Brown (for secretly plotting the overthrow of the US government) and Jeremy Hammond (for hacking servers of Statfor, a private intelligence company, and leaking its information to anti-secrecy site, WikiLeaks), as well as several members of the LulzSec offshoot in the UK.

Interestingly, the FBI has also worked with Anonymous members. In 2012, Sabu, aka Hector Monsegur carried out a series of cyber attacks on government and corporate websites in Brazil to help the FBI carry out one of its biggest cybercrime investigations.