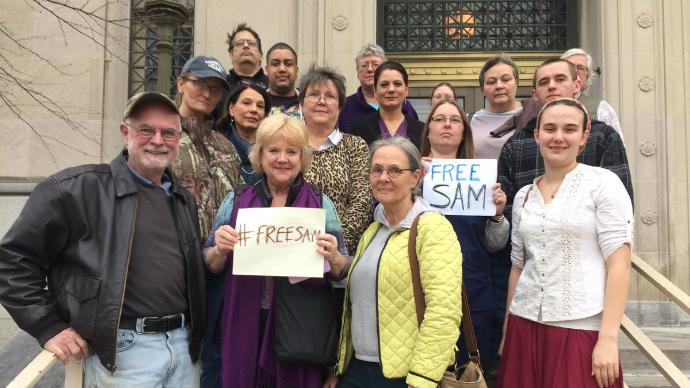 56-year-old Samuel Girod, an Amish father of 12 and grandfather of 25, is facing a 12-count federal indictment for manufacturing and selling Chickweed Healing Salve (which cures skin ailments including psoriasis and cancer); TO-MOR-GONE (which removes warts, moles and tumors); and R.E.P. (which treats sinus infections, cold symptoms, and sore throats) — without seeking to register his essential oil-based herbal products with the U.S. Food and Drug Administration.

“The Federal Food, Drug, and Cosmetic Act (FDCA) defined a “drug” as an article that was: (a) intended for use in the diagnosis, cure, mitigation, treatment, or prevention of disease in man; and/or (b) intended to affect the structure or any function of the body of man; and (c) Chickweed Healing Salve, TO-MOR-GONE, and R.E.P. were “drugs” as defined within the FDCA.

“The FDCA prohibited the introduction or delivery for introduction into interstate commerce (or the causing thereof) of any drug that was misbranded. A drug was misbranded if it was manufactured, prepared, propagated, compounded, or processed in an establishment that was not registered with the FDA. Chickweed Healing Salve, TO-MOR-GONE, and R.E.P. were each manufactured, prepared, propagated, and processed in GIROD’s unregistered establishment and, thus, were each misbranded.”

According to the FDA, only registered and FDA-approved drugs can claim to “heal, treat, cure, or prevent” an ailment. So in order to keep selling his products, which Girod says were not drugs, he was required to pay hundreds of thousands of dollars and wait years to go through the arduous process of FDA testing and approval. But now he stands to spend the rest of his life behind bars — for his refusal to comply.

According to the federal complaint, the FDA inspected a convenience store in January 2012 after a consumer reported Girod’s products to the state health department in Missouri. In March 2012, federal marshals seized more than 1,600 containers of his products from the store, claiming they were misbranded drugs that violated FDA approval and labeling requirements.

Further, according to the federal complaint, Chickweed Healing Salve contained comfrey, which may increase the risk of systemic toxicity, and TO-MOR-GONE contains bloodroot, a caustic, corrosive substance that produces a thick scar that can mask tumor recurrence. However, Girod, who is charged with conspiracy, distributing misbranded drugs, and threatening a witness, had made and sold the natural skin salves made from herbs (such as rosemary, beeswax, peppermint, chickweed, eucalyptus oil, olive oil, and lavender oil) for the past 15 years from his family farm in Bath County, and from convenience stores in Missouri.

In 2013, a federal court in Missouri barred Girod from manufacturing and distributing some of his products until he met certain conditions, including allowing the FDA to inspect his production facilities. However, Girod kept the two FDA officers from inspecting his facility when they showed up in November 2013. Further, WKYT writes, Girod continued to sell the products without letting his customers know they were the subject of a court-ordered injunction. But The Homestead Guru reports:

“Girod changed his labels many times. He tried to peaceably cooperate with the authorities on many occasions. FDA representatives and the deputy sheriff came to his farm in late 2013 and agreed not to bring cameras, but they broke their word. After that, Girod declined their request to inspect his home, (correctly) citing that they did not have a warrant and therefore had no right to be there. The deputy sheriff agreed, and escorted the agents away — but the FDA didn’t like that.”

In his motion to dismiss the indictment, Girod alleges that “the FDA lacks standing to investigate his activities and that the United States lacks standing to prosecute him because the products he manufactured and distributed at his establishment were not drugs.”

In his objections, Girod claims that his actions should not be governed under the FDA’s authority or regulations because “the FDA did not follow its own procedures.” Further, Girod asserts that the FDCA provisions involved in the case violate his First Amendment free speech and free exercise rights.

Incidentally, after he failed to be present for a court hearing in 2016, Girod was arrested at his farm in early January on “failure to appear” charges. He is now in jail without bond awaiting his trial scheduled for February 27, 2017. Bath County resident, Suza Moody, told The Free Thought Project:

“I can’t even figure out what he has done wrong. They live at the foot of the cross and the thought of one of them intentionally doing something wrong is outrageous. They are targeting the Amish because they don’t threaten. They don’t fight back, and they don’t like lawyers. They are just devastated. I mean when they brought him out in handcuffs. It was awful.”

This article (FDA Forcing Kentucky Farmer to Rot in Jail for Making Cancer Curing Herbal Salve) is a free and open source. You have permission to republish this article under a Creative Commons license with attribution to the author and AnonHQ.com.