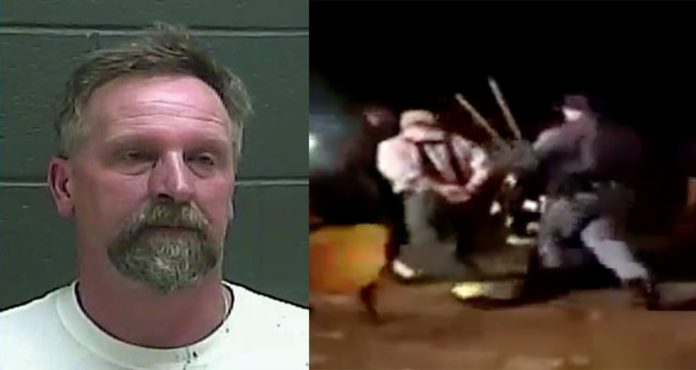 An Indiana Fire Chief was arrested after a brief altercation with a Cannelton Indiana cop. Cannelton’s volunteer fire chief, Christopher Herzog, was the lead firefighter on the scene of a house fire on Tuesday. Thinking he knew better than Herzog, the Cannelton cop, identified as Ryen Foertsch, repeatedly tried to break out a window of the home on fire, a known hazard when fighting fires. Herzog pushed him back and was hit. Foertsch was charged with felony battery of a law enforcement officer. According to reports, Foertsch and another officer arrived on the scene and cleared two rooms in the house before being forced out by the smoke. After exiting the burning house, Foertsch attempted to smash out the window of the remaining room, to check if there were people inside. While well intentioned, this officer is obviously not trained in fire fighting. Smashing out the window would feed oxygen to the flame and thus cause the fire to intensify. Herzog, being an experienced firefighter, stepped in to prevent this from happening.

According to police, Herzog pushed Foertsch “hard enough to cause him to step back.” Foertsch continued to attempt to break the window, causing Herzog to push him back a second time. Herzog yelled at Foertsch to “get off his scene” and was completely correct in doing so. If cops and the fire department arrive at the fire at the same time, the fire chief gets control of the scene. After the initial incident, Foertsch conferred with his supervisors, who thought it would be a good idea to pursue the matter and call in the highway patrol to investigate. Calling in the outside agency would be the right thing to do if a crime had actually been committed and not a fire chief simply protecting his scene from an ignorant cop.

The highway patrol investigated the incident, and of course, always taking the side of cops, they decided to arrest Herzog for felony battery of a law enforcement officer. On top of arresting Herzog, the police ordered the fire department off the scene. The fire hadn’t been completely extinguished, resulting in the victim’s, identified as Chris Zukeschwerdt, home re-igniting and burning to the ground. The police are ultimately responsible for the loss of property this man has suffered by not allowing the fire department to do their job. In doing so, not only have they embarrassed themselves in front of the world, they have opened themselves up to multiple lawsuits by the homeowner, the fire department and Herzog.

“I was in shock” Zukeschwerdt told the media. Zukeschwerdt was an emergency medical technician for 40 years. “When I saw the faces of those firefighters-to see their leader being pulled out of here while he was fighting a fire was just unreal. I’ve never seen anything like it in my life.” Then he heard something shocking. He heard one of the police officers say “We’re in charge of this scene now.” He also heard cops tell the fire department to grab their gear and leave. The fire wasn’t out, and after everyone left, it burnt down. Herzog was bailed out by the Cannelton Mayor, a strong indicator that this BS case will get scrubbed by the state attorney.

Sources: Photography Is Not A Crime.

This article (Fire Chief Prevents Cop from Making Fire Worse, Gets Arrested for Battery) is a free and open source. You have permission to republish this article under a Creative Commons license with attribution to the author and AnonHQ.com.