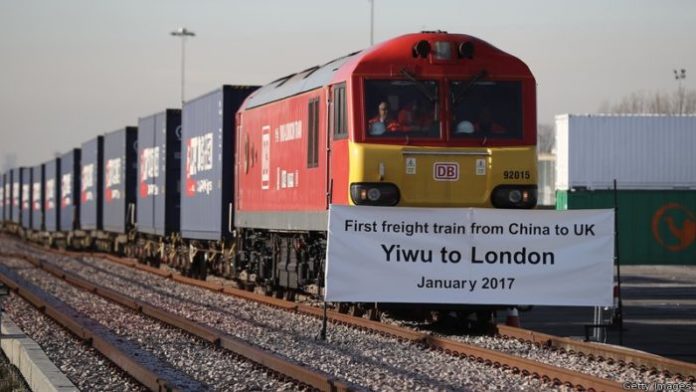 China is emerging as an economic powerhouse. The evidence is all over the place. Across the length and breadth of the world, there is Chinese investment going on just about everywhere.

In January 2016, China announced it would build a massive 8000-mile high-speed train line connecting the country with Russia, Canada, and the United States via a 125-mile underwater tunnel. The route would begin in the country’s northeast and extend through Siberia and across the Bering Strait into Alaska. The entire trip would take two days, with the train traveling at an average of 220 miles per hour. China said the underwater tunnel technology is already in place, and that it is currently being used to build a high-speed railway between the south-east province of Fujian and Taiwan. This development means China is ready to strengthen its economic ties with Europe and the rest of the world.

The country is still doing more to increase its economic ties with Europe. On Wednesday Jan. 18, the first ever China-to-Britain freight train arrived in the British capital, London. In total, the train traveled 7,500 miles from Yiwu, a wholesale market town in the eastern Chinese province of Zhejiang. The train reached its final destination at Barking, east London. It took the crew 18 days to pull the long train from China to Britain. There was fun-fair and jubilation among local residents when the train arrived. The train passed through Kazakhstan, Russia, Belarus, Poland, Germany, Belgium and France, before finally crossing under the English Channel into Britain.  According to Reuters, the consignment the train carried would have taken around 35 days to reach Britain by sea. This proves the entire train project is a significant achievement for both China and Britain.

The train reportedly carried a cargo of small commodities to Britain, including household items, clothes, fabrics, bags and suitcases.  The cost of the 34 containers transported to Britain is estimated to be worth around £4 million.

The train service is run by Yiwu Timex Industrial Investment. It is said the new freight service makes London the 15th European city to have a direct rail link with China after the 2013 unveiling of the “One Belt, One Road” initiative by Chinese President Xi Jinping. The train is operated by the Swiss-based InterRail Group. The company’s Managing Director Carsten Pottharst told reporters there would be more running of trains between China and the United Kingdom through the route.

“This moment was important to show that we can run the train in less than 18 days to the UK. It depends also on how much cargo we can get from the UK to China – if we can manage to get more trains eastbound, then there could be more,” he said

The new rail route is said to have reopened the historical Silk Road route that was previously used by merchants to transport goods between Europe and Asia. The Chinese and British governments hope the new route will increase trade between the two countries. British Prime Minister Theresa May said her country’s relationship with China remains “golden.” She revealed how Britain is seeking to bring in billions of dollars in Chinese investment as the country prepares to leave the European Union.

China is now the world’s biggest exporter, with annual exports totaling over $2 trillion in 2015. Many countries around the world are therefore hoping to take up the opportunity to strengthen their economic ties with the communist-run country in East Asia.

This article (First Direct Train from China to Britain Arrives in London After a 7,500-mile Journey) is a free and open source. You have permission to republish this article under a Creative Commons license with attribution to the author and AnonHQ.com.