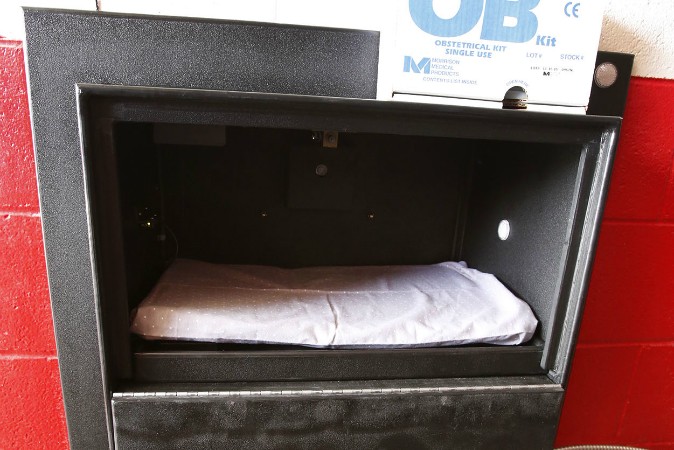 Baby drop-off boxes are incubated boxes, typically installed in exterior building walls, where mothers can drop off their newborn babies usually up until 31 days of age to anonymously surrender their child.

The Knights of Columbus of Indiana have agreed to pay for the installation of the first 100 boxes in Indiana. Each box costs between $1,500 to $2,000.

These boxes will also be equipped with a security system that notifies emergency personnel whenever a baby is dropped off and emergency responders can be at the location within minutes to care for the baby.

All 50 states already have Safe Haven laws that allow unharmed newborns to be surrendered without having to provide the mother’s name at hospitals, fire stations, and police stations. This ensures that more babies are left in safe places to receive medical attention and be cared for rather than abandoned or left in harm’s way.

Baby boxes are controversial for several reasons, but the fact that Indiana has recently signed an abortion bill that adds more restrictions that prohibits women’s access to abortions seems to be a related argument against those against baby boxes.

Some say that if Indiana had less restrictive abortion laws that more women would be able to undergo the operation and this would lessen the amount of unwanted newborns being surrendered. Growing up with the knowledge that your parent dropped you off as a newborn without any history of your past can be traumatizing and it could be avoided if the babies weren’t born in the first place.

Others point out that these baby boxes could be abused by mothers with babies over 31 days old that want to surrender their babies, which would be illegal to do at a drop box but possible considering the lack of security surrounding the locations.

Baby boxes could also prevent new mothers from receiving much-needed medical attention if they gave birth outside of a hospital and could even cause mothers to relinquish their babies before weighing all their options. About 25% of parents who initially decided to surrender their baby under the Safe Haven laws chose to instead make an adoption or parenting plan when given the chance to discuss all of their options.

There are other questions critics are posing, such as who will pay for the boxes which are just an extension of the locations already in place, but Monica Kelsey, an advocate for baby boxes, believes that a woman’s right to anonymity and an infant’s right to safety all override these doubts.

Kelsey herself was surrendered at a hospital by her birth mother and the first baby box was installed on April 19, the anniversary of the day she was abandoned.

Her response to critics is, “This is not criminal. This is legal. We don’t want to push women away.”

This article (First Drop-Off Box For Unwanted Newborns Installed In Indiana) is free and open source. You have permission to republish this article under a Creative Commons license with attribution to the author and TrueActivist.com