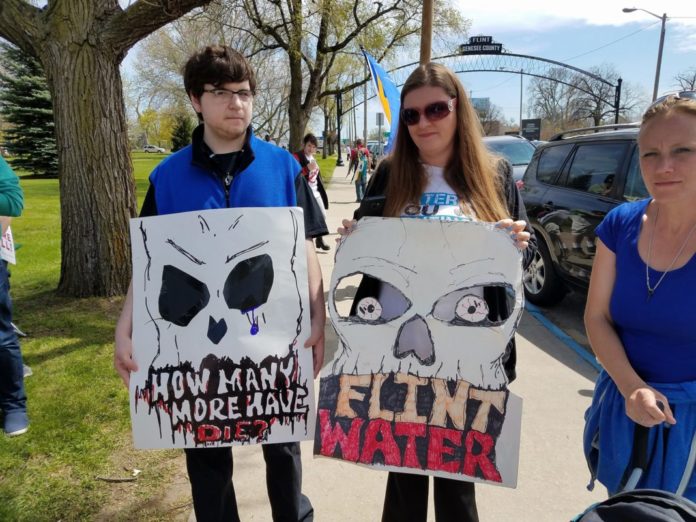 The Flint water crisis is still ongoing. ‘Camp Promise’ of Flint, has set up camp at Kearsley Park in Flint to help the residents still affected by the crisis. They say help can’t come quick enough, challenging Flint officials to fix the problem now rather than in the designated three year time frame given.

One spokesperson for the camp, Ryan L’ Oree said they’re remaining at the park until the Flint crisis is resolved.

“They’re saying it’s going to take three years before all these pipes get fixed. We know that they have the money to do it. We know that they have the labor to do it. There is no reason why it should be taking three years to get these pipes fixed. Flint people are dying now. We’re not fighting an oil line here. We’re not fighting a gas line here. We’re fighting a system that is broken,” L’Oree said.

The peaceful protest also aims to run the volunteer-based camp come resource center to assist with water delivery and labor for installation of such things as water filters, to help the Flint residents.


It is the three year anniversary of the water crisis, which residents now calling themselves The Resistance, are peacefully trying to get their voices to be heard, to “deliver themselves from the oppression.”

The town hall meeting, to discuss the unresolved issue of the Flint water crisis was scheduled for April 20. As Alek Hidell only recently reported, resulted in arrests and discrimination against concerned citizens dissatisfied with the lack of progress in resolving the issue.

Jordan with TYT Politics, reports that the water is still undrinkable. The camp is demanding independent investigations and for the problem to be resolved within the year. Although the police had made a promise to leave Camp Promise and its peaceful protesters intact at the park, the ‘deal’ has been reneged, giving the protesters until Monday to come up with a ‘Plan B’ or they will be forcibly removed from the park.


Anonymous, who also support the people at Kearsley Park both physically and also through the media sites, ask for this article to be shared to raise awareness of the ongoing crisis. The more boots-on-ground support the better, however all awareness through social media platforms is essential to the people of Flint. Pressure must be placed on the government and those responsible must be truly held accountable.

The offer has been made to move the water protectors to “land bank property” that is considered “open lots” or foreclosed land. Rightfully so, the protesters are suspicious that if they move to the land bank property – hidden from public view – they will be arrested.

Show your support. Stop the MSM vilification of their rights. Spread the message: The Flint Water Crisis is yet to be resolved.

AnonHQ welcomes any further information , photos or videos on Camp Promise to be posted in the comments section below. Let’s not allow the government to make the Flint residents invisible. Please show your support at the official Camp Promise Facebook page.

This article (Flint Water Crisis Persistent: ‘Camp Promise’ Protesters Make a Stand – Needs YOUR Help) is a free and open source. You have permission to republish this article under a Creative Commons license with attribution to the author AnonWatcher and AnonHQ.com.