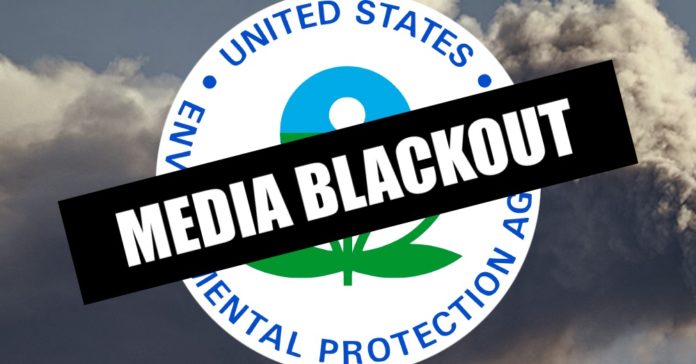 A complete media blackout handed down by the new Trump administration has silenced the Environmental Protection Agency (EPA), preventing them from posting blogs, barring staff from awarding new contracts, and most chillingly, vetting and detouring press requests and questions to the Office of Administration and Resources Management.

“Incoming media requests will be carefully screened,” one directive said. “Only send out critical messages, as messages can be shared broadly and end up in the press.”

The media blackout also prevents the EPA from posting on their social media accounts. Although the Trump administration has called this temporary until they can “get a handle on everything” and so they can ensure “what goes out reflects the priorities of the new administration” one must ask why the government feels the right to over extend their reach to silence an environmental agency.

The EPA recently released a report warning of the dangers of fracking contaminating US water supplies, where the “cases of impact” pointed out that water contamination occurs in all stages of the fracking process.

In one recent blog on the EPA’s blog post, EPA’s Gina McCarthy spoke about Congress accusing the EPA of “overreach.” However, after an analysis of court decisions “reviewing the actions taken by the Obama EPA under the Clean Air Act” – the largest EPA actions taken – it was found that the EPA clearly “followed the law and science.”

It further states that when taking cases to the D.C. Circuit, the EPA won 81 percent, only losing 10 percent with the rest resulting in mixed decisions. This shows the strength of the EPA in the court of law when they fight to make the word cleaner and safer.

In short, the EPA holds Congress and the government accountable.

One new change on the EPA website, however, is the White House tab to “sign up for updates from President Donald J. Trump,” notably with the URL ‘transitionsplash.’

One email memo, obtained by the Associated Press read “”This includes, but is not limited to, news releases, photos, fact sheets, news feeds and social media content.”

The EPA isn’t the only one to suffer this censorship blow. The Department of Agriculture has also received orders not to release anything to the public, says AP, including any document.

Trump supporter or not, blacking out and censoring free speech and scientific/environmental reports are not okay in a country that proclaims freedom for all – no matter the excuse. This is a blatant exercise of overreach by the government and an insult to democracy; while they decide what fits their agenda – their own words. No government has the right.

The last Tweet from the EPA’s official page came out on Jan. 20, the day of Trump’s inauguration speech to “Make America great again.”

This article (Free Speech Silenced as EPA Ordered to Remain Silent, Complete Media Blackout by Trump Administration) is a free and open source. You have permission to republish this article under a Creative Commons license with attribution to the author AnonWatcher and AnonHQ.com.