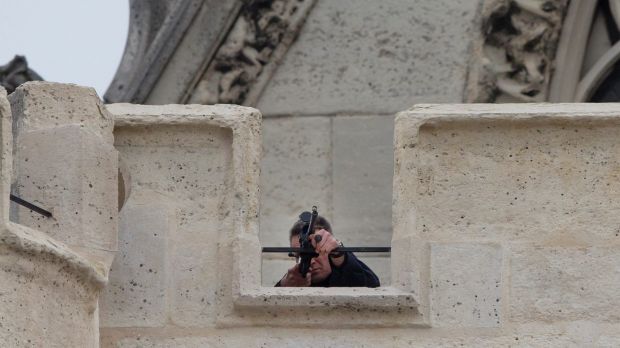 A French sniper overseeing a speech presented by President Francois Hollande accidentally fired his weapon, injuring two bystanders. According to reports, the sniper failed to engage the safety on his sidearm, which led to the weapon discharging. This comes at a time when French police are under scrutiny for increasing acts of brutality and misconduct. Incidents like this bring into question basic police training and aptitude, as weapon safety is a fundamental practice for law enforcement in France and around the world. This show of incompetence comes on the heels of weeks long riots over what has become an epidemic of police brutality in France. While it appeared that the US had a monopoly on police misconduct, more and more incidents in France have been making headlines. Most recently, the sexual assault of a black man with a baton by Paris police led to riots and destruction on the streets. President Francois Hollande was presenting to a gathering of people at the inauguration of new high speed rail line when the incident occurred. “I hope it’s nothing serious,” Hollande commented during his speech as the shot rang out. A police representative told the press that it was an accidental firing. The officer shot himself in the foot with the ricocheting bullet striking two additional people, both in the legs. They were treated for minor injuries. The police have already begun an official investigation and stated that the local prosecutor will be overseeing the case.

This article (French Sniper Accidentally Shoots Two People in Crowd at President Hollande Event) is a free and open source. You have permission to republish this article under a Creative Commons license with attribution to the author and AnonHQ.com.