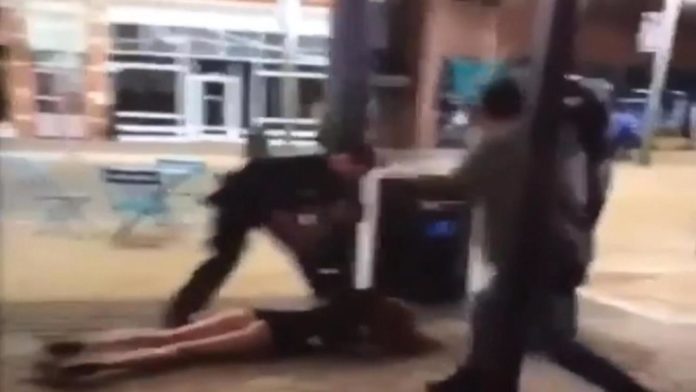 A Ft. Collins Colorado cop is out on leave today after a video showed him slam a tiny female during a confrontation. The department identified the officer as Randall Klamser. He was suspended with pay pending the outcome of an internal investigation. Despite the fact that cameras are everywhere, this incident again proves that police will continue to act as though no one is watching. The female who was aggressively battered by Officer Klamser was 22-year-old Michella Surat. Surat was outside a nightclub where her boyfriend had been ejected. The exact circumstances are unknown, but what is known is that the video showing the incident has caused quite a stir online. The video begins by showing the officer grabbing at Surat. According to police, she physically assaulted the officer, however the video doesn’t show this. Klamser grabs hold of Surat and forcefully throws her to the ground, her face connecting with the pavement. The video is gut wrenching to watch.

The police chief jumped to his officer’s defense and stated that the video was taken out of context. Chief John Hutto told the press, “I have a duty to preserve and protect the processes that our society has put in place to ensure that the questions surrounding this incident are answered in a fair and impartial manner.”

Despite the cell phone video making the rounds online, he refused to release the body camera footage that they are in possession of.

“I have no control over the video that is already in the public domain, but I do have control over the release of the video evidence from our body-worn cameras. This is an open investigation and to release evidence, absent a truly compelling reason, would not be proper. I am committed to preserving a process that ensures a fair and impartial outcome. I am equally committed to preserving the rights of both Ms. Surat and the involved officers,” Chief Hutto said.

The biggest problem with the video and the officer’s actions pertain to an area of police use of force that no one ever talks about. Officer Subject Factors are a key part of an internal investigation into use of force, yet the public rarely hears about them. Officer subject factors describe the height, weight, strength and other factors that go into an officer’s decision to use force. In the case of this officer, he was much larger and stronger than Surat and could have easily taken her into custody without needing to exert much force. If he had been facing Hulk Hogan, he would have been justified in pulling his gun on him. The officer subject factors in this case absolutely did not warrant the violent take down delivered, regardless of her actions toward the cop. The unjustified takedown of Surat was nothing more than a demonstration of how cops feel the need to dominate every situation. Surat was violently assaulted because she failed to bow down to the will of an officer who doesn’t deserve to hold the privilege of “protecting and serving” the public.

This article (Ft. Collins Cop On Leave After Viral Video Shows Him Slamming 90 Pound Female) is a free and open source. You have permission to republish this article under a Creative Commons license with attribution to the author and AnonHQ.com.