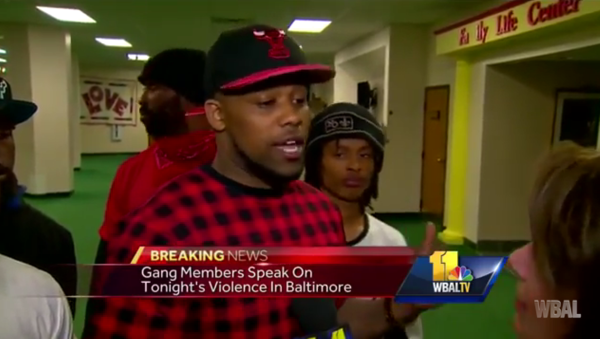 Following the killing of Freddie Gray by the police in Baltimore, events in the city are changing dramatically with each passing day. The three main rival gangs in the city: The Crips, Bloods, BGF, and other gangs have called for a truce during one of the protests. They have said that they are now united to protect their community from violence and brutalities.

But something dramatic happened after this announcement. Within 12 hours after the announcement was made, the whole establishment of Baltimore started fabricating false stories; that these gangs which are pledging to ensure peace were going to join up with the specific intention of killing police and burn down the city completely.

This news flooded onto the home page of every mainstream media in the city, heightening tensions to the extent that some gullible people started staying indoors just to avoid being caught up in the “impending” chaos.

The police, for which the protest was held, increased fear and panic by issuing a press statement that there was a “credible threat” that gang members were planning to carry out attacks on the police. The mainstream media continued to carry this false propaganda release to deceive people. The most surprising thing is that none of the media outlets carrying this false story bothered to even do a small background check in order to confirm or deny what the police have put out. The truth of the matter is that there was no evidence to back this claim up. The only reason for this false release is the fact that authorities fear that these long-time rivals will be able to create a force capable of preventing what had happened to Freddie Gray from occurring ever again. In unity, they say there is strength.

This should tell you that the authorities (establishment) wants people divided, and that they fear that other armed and organized groups, providing their own communities with protection, will effectively challenge the monopoly on violence that had been the only strength of the police.

It was only Deborah Weiner of WBAL-TV News who took the trouble to explore the other side of the story by talking to the gang members. Crips, Bloods and members of the BGF told the television network that they called the truce in order to protect their communities from violence, looting and to protect their community from anyone who would put it in danger, denying that their goal was to kill police.

Independent observers even said that the gang members had displayed immense intelligence and understanding of the situation.  And it was even revealed that the gangs had come under attack by the police while they had attempted to defend people and properties throughout the city from rioters.

In fact, some journalists have also confirmed that they were saved by gang members when they became trapped during the chaos. The Baltimore Sun journalist- Justin Fenton and Ben Jacobs of the Guardian independently commended the gangs for what they are doing. It was also reported that the gangs have been engaging in directing traffic in the city to make the movement of vehicles smoother.

These testimonies prompted Baltimore’s City Council President-Bernard Young to meet the gangs, and he had this to say after the meeting: “These men have been out on the street quelling the senseless violence that has consumed our city. After meeting with them today it is clear that the notion they were planning on harming our police officers is false and simply deterred the resources we needed to focus on the individuals who instigated these riots. I applaud these young men for standing here and speaking out for our city.”

The attempt by the police to discredit what these young men are doing  has backfired. We encourage them to continue to protect their community from violence, either from the police or from any individual.