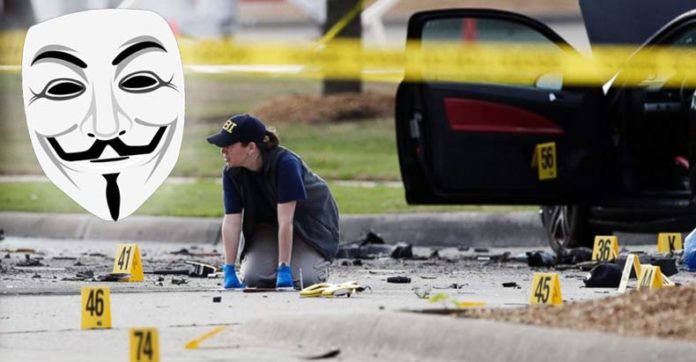 Garland, Texas –On the 4th of May, Elton Simpson, aged 30 and Nadir Soofi, aged 34, opened fire on  an unarmed security guard outside of a Prophet Muhammad drawing contest.

Word has gotten out that two days before that incident, a woman living outside of the US, who was connected to Anonymous, had sent a message to the official Garland Police Department Twitter account warning of a potential Islamic State attack.

Apparently, the message never raised any red flags… or was forwarded on by police. Was it Incompetence, too much information…? Or did they let it happen?

“That is the first time I’ve heard that,” GPD spokesman Joe Harn said, when informed of the warning, according to The Daily Dot. “We were monitoring things; we had the FBI and ATF, but we didn’t see anything [on Twitter].”

The Muhammad Art Exhibit and Contest was, in actuality, a poorly-disguised attempt at provoking a reaction from Muslims… extremist or otherwise. It was a Muhammad drawing contest being held under the auspices of free speech, and would have been considered blasphemous and a direct provocation to Muslims as it is forbidden within Islam to create physical representations of the Prophet. It is widely thought that the January attack on satirical French paper Charlie Hedbo was a direct result of their humorous cartoon depictions of the Prophet; as such, it is surprising that the police department did not take sufficient precautions to protect the unarmed guards, particularly when they were warned of the pending threat. Anonymous has shown a penchant for targeting Islamic State accounts on Twitter and has numerous IS-related groups that regularly attack and track the terrorist group on social media.

According to The Daily Dot:

“At 5:37 p.m. on Friday, May 1, the user, who requested anonymity for the sake of her security, tweeted at the Garland Police Department’s official Twitter account, warning them of a potential attack. …

On Friday, the user discovered that another Twitter account, @AnsarAlUmmah49, had referenced an upcoming attack in Garland, where a group of Americans were planning a “draw Mohammad” event.

So the user tweeted to @garlandpd with a link to the tweet in question, which called for an attack, specifically in Garland and on May 3. @AnsarAlUmmah49 has since been deleted.” Although the Garland PD apparently didn’t get the Twitter message, it appears that law enforcement was fully aware of the plot, as they had teams on the ground to take out the shooters immediately after the attack began.

This raises the question of why, if teams were on the ground and aware of the imminent attack, were these men allowed to open fire before being neutralized by law enforcement?

If the operation was conducted in the name of public safety… then these men should have been taken into custody well before they actually attempted to execute an attack.

It would seem that law enforcement might have allowed the attack to take place, and at this point it should come as no surprise.

They had possibly allowed this plot to progress to the point of actual gunfire, with the singular intention of creating a media sensation of a “home-grown” “lone-wolf” “ISIS” “terrorist attack”. This has been proven in the past to make people more fearful and thus more readily willing to give up civil liberties in the name of safety… and also has been particularly effective at “forcing” patriotic American citizens to endorse horrific strikes abroad.

Americans are tired of the government spying on them; the state is likely struggling to justify why they have these blanket surveillance programs listening in on innocent U.S. citizens’ conversations… Surveillance programs that seem to be “unable” to detect, much less prevent, any of these terror strikes.

They will probably use this event to persuade you to give in to their surveillance… because when bad things happen, and the surveillance fails despite being warned by Anonymous… they will tell us that it’s only because we are not being watched enough.

What do you think; did the government allow this attack to take place as a means of making people more willing to give up freedom for the illusion of safety? Let us know in the comments below.

Please share this story if you think this “attack” was intentionally allowed to happen.