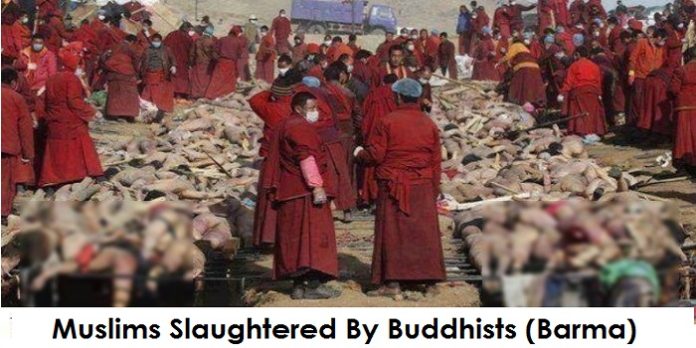 In July 2016, we reported a renewed violence against the minority Muslim population of the former restive country in south-east Asia, Myanmar, also known as Burma.

Myanmar has been involved in one of the world’s longest-running civil wars after independence from British rule. During the period, the United Nations and several other human rights organizations reported consistent and systematic human rights violations in the country.

In the country’s state of Rakhine, the ethnic minority known as Rohingya has been under subjugation for years now.  In fact, the subjugation against the Rohingya Muslims is state-sanctioned.

Myanmar is a Buddhist-dominated country.  The Rohingyas are considered stateless by Buddhist hardliners in the country. Many people consider them as illegal immigrants brought into the country by the British from neighboring Bangladesh during the colonial period. This is true. The British imported the Rohingyas from modern day Bangladesh to work as farm laborers in the country, in order to produce raw materials to feed their industries back home in Britain. But when the British left Myanmar, they forgot about the Rohingya people. This is the basis for this current situation in Myanmar. You see what colonialism driven by greed and selfishness has caused?

The Rohingya refugees have therefore been largely relegated to destitute displacement camps and subject to a host of restrictions on their movements and access to basic services. In 2012, religious violence erupted in Rakhine. The Rohingyas were hit hard. Many had to flee for their lives. It is estimated that the violence forced more than 100,000 Rohingya Muslims to flee their homes.

From that violence till now, there is no sign of a peaceful solution. In fact, the situation has gone from bad to worse. The country’s government, led by the National League for Democracy, and founded by the Nobel Peace Prize winner, Aung San Suu Kyi, has responded by deploying the military to restore calm in areas hit by violence against the Rohingyas.

But because the majority of these soldiers are Buddhists, and hate the Rohingya Muslims, rather than help keep the law and order, the soldiers have turned their weapons against the vulnerable refugees they are supposedly meant to protect from violence.

Many human rights groups have documented numerous abuses and rights violations by the country’s military against the Rohingya. These include summary killings, rape, torture and forced detention among others.

Professor William Schabas, an expert in genocide, said that Myanmar as a nation denying the Rohingyas an identity means the country doesn’t want them to live. “Trying to deny the identity of the people, hoping that eventually they no longer exist, denying their history, denying their legitimacy of their right to live where they live; these are all warning signs that it’s not frivolous to envision the use of the term, ‘genocide’,” Schabas said. Since October 2016, the situation in Myanmar has become far worse for the Rohingyas. On October 9, three border posts along the border of Myanmar and Bangladesh were attacked by a group of Islamic militants, leading to the death of nine policemen. Myanmar’s military claimed the attack was carried out by the Rohingya Solidarity Organization. The military then launched what it described as a counter terrorism operation. In addition, there were many reports suggesting that many Rohingya vulnerable women were raped and assaulted at gunpoint by army officers. During the operation, the military blocked any form of humanitarian aid to the areas it was operating in. This forced over 30,000 Rohingyas to flee by dangerous means to neighboring areas for safety. Most of those persecuted are rice farmers and petty traders who have already lived in dire conditions before the military operation was launched against them.

Due to the reports and concerns coming from Myanmar, the United Nation’s Office of Human Rights declared that the persecution by the military against the Rohingya Muslims could “tantamount to crimes against humanity.”  In November 2016, the United Nations dispatched its former chief Kofi Annan to Myanmar, to find a lasting solution to the Rohingya problem. But when Annan arrived in the country, he was met by Buddhist protesters claiming they were against a foreign intervention in the crisis. Meanwhile, as the United Nations and other rights groups are keen to see a lasting solution to the crisis, Nobel Peace Prize winner Aung San Suu Kyi has remained silent on the crisis. Currently, San Suu Kyi holds the position of State Counselor of Myanmar. It is one of the more powerful positions in the nation.

The 1991 Nobel Laureate’s silence has drawn international criticism. As many as 23 Nobel Prize winners have sent an open letter to the United Nations Security Council, lashing out at Suu Kyi for doing nothing to help the Rohingyas escape the military terror unleashed on them. Apart from the letter, other human rights groups have teamed up to launch a petition on Change.org, looking for signatures to take back the Nobel Prize awarded to Suu Kyi, due to her failure in the Rohingya crisis. So far, over 200,000 people have signed the petition. You can also click here to add you signature to the petition. The Rohingyas need our help. As you see in the videos, the Rohingyas are the most persecuted people currently living on Earth.

This article (Genocide Against Muslims Unfolding in Myanmar, Nobel Peace Prize Winner Silent [Video]) is a free and open source. You have permission to republish this article under a Creative Commons license with attribution to the author and AnonHQ.com.