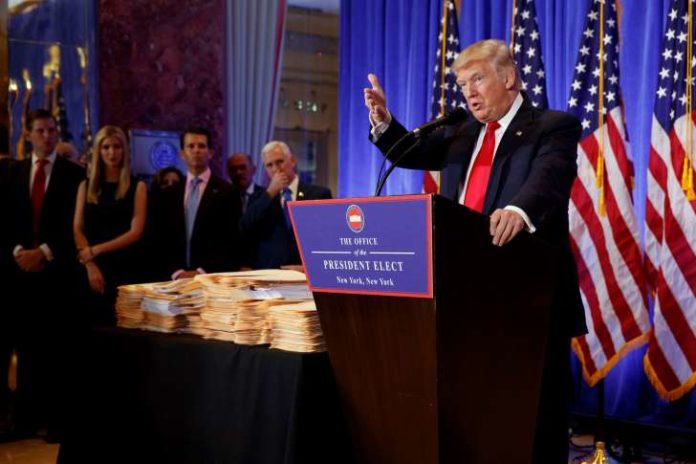 Donald Trump has labelled CNN as ‘fake news’ after they released an unsubstantiated and unverified report detailing a dossier of Russian intelligence compiled on the President-elect.

At the news conference in Trump Towers, BuzzNews was also included in the denouncing, with Trump calling them a “failing pile of garbage.” This comes after BuzzFeed News published a copy of the dossier in full.

Although Trump has admitted in the New York news conference that Russia may have had something to do with the DNC leaks during the campaign, he still denies it was to assist in his election to presidency. He also stated that if Russia were to have such damaging information on him, as the released BuzzFeed News dossier suggests, then Russia would have likely already acted on it. This also comes at a time when the Kremlin has denied holding any such intelligence.

Trump didn’t hold back when CNN reporter Jim Acosta attempted to ask a question. “You are fake news,” Trump said, refusing his request.

Intelligence officials have yet to corroborate the allegations contained in the dossier, yet still reportedly included them in a “highly classified report.”

Further to the release of the dossier, President Vladimir Putin’s advisors have called it “absolute fantasy.”

Obama, in an interview with NBC News, declined to comment on the matter, but did say that “if they [the news] do a bad job, I’ll say, ‘You’re fired.”

CNN, where the term ‘fake news’ was helped coined, has come under fire in recent weeks for propagating misleading news about the elections in Ghana, Africa and attempting a smear campaign against Julian Assange by airing an interview that falsely accused Assange of being a pedophile. They have also recently been caught out using a screenshot from the computer game Fallout 4, stating it illustrated the Russian hacking.

In late December 2016, CNN accused alt media AWDNews and other organizations of affecting real events with their fake news.

Fox News raced to CNN’s aid, with Fox News anchor Shepard Smith claiming “Neither they, nor any other journalists, should be subjected to belittling and delegitimizing by the president-elect of the United States.”

While CNN firmly denies Trump’s accusations, a statement was released saying “ We are fully confident in our reporting … “It represents the core of what the First Amendment protects, informing the people of the inner workings of their government; in this case, briefing materials prepared for President Obama and President-elect Trump last week. We made it clear that we were not publishing any of the details of the 35-page document because we have not corroborated the report’s allegations.”

CNN has become the main contender in the war against ‘fake news,’ so far as to establish a Facebook page on how to “Outsmart Fake News” in your feed.

This article (Donald Trump Labels CNN as Fake News) is a free and open source. You have permission to republish this article under a Creative Commons license with attribution to the author AnonWatcher and AnonHQ.com.