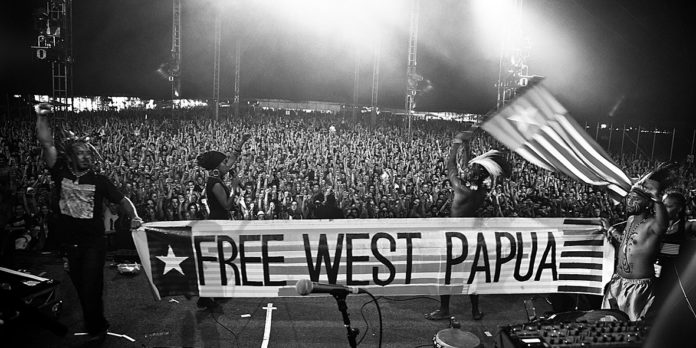 West Papua, a province of Indonesia, has continually witnessed the devastation of genocide by the Indonesian military. In a clip documenting some facts and figures, Moore presents the cold hard reality of the Australian government turning a blind eye to the atrocities.

Ironically, in World War II, the “Fuzzy Wuzzy’s” were iconic in the support and care of Australian troops in some of the more brutal scenes of Australian war history. Their intervention saved countless lives, and Australian children were educated to understand their bravery and contribution. But as Moore points out, the Australian government, no matter the party in power, will not speak out against the crimes that the Indonesian government have committed against West Papua over the last decades. The Indonesian Military run a close parallel to the likes of those witnessed in the past. The Indonesian military continue to grow at an alarming rate, with the Australian government supporting the training of some at no cost to the Indonesians. For the nation, an annual budget of the equivalent to $8.1 million U.S. is reported on the clip. Their crimes continue to be documented, but economic sanctions are nonexistent. The only existing standards are that Indonesia do not ship “second-hand” products. The fundamental treatment of human rights by Indonesia has passed through almost unquestioned and unchecked, according to scholars of Peace and Conflict Studies at Sydney University. Their report “A slow-motion genocide: Indonesian rule in West Papua,” coincides with the atrocities that Moore brings to our attention.


“Indonesia invaded West Papua in 1962-63. It officially annexed the territory via a farcical United Nations-supervised “Act of Free Choice” in 1969 a sham referendum in which only 1054 people, hand-picked by Indonesia, were allowed to vote,” Greenleft have documented, an alternative news site. “Australia has long supported Indonesia’s occupation of West Papua, and helps train Indonesian military units accused of human rights abuses.” The report suggests that over half a million have been killed as a result of the Indonesian occupation:

“Australia, a quasi military ally of Indonesia through the 2006 Lombok Treaty (which was itself based on suppressing international support for West Papua), will find itself in an increasingly awkward position: a self-proclaimed promoter of human rights, yet a supporting actor in a military occupation entailing crimes against humanity and genocide.”

Some valuable resources behind the bloodshed?

Freeport’s Grasberg mine is located in Indonesia’s province of Papua. The mine is one of the largest and richest mining operations in the world, generating “colossal profits” from copper and gold for the Indonesian government and its parent companies: Freeport McMoRan Copper & Gold and RioTinto. According to the Global Policy Forum, even though the mines are some of the largest, the human rights abuses and corruption make this a complicated endeavor. Grasberg is also Indonesia’s “largest source of tax revenue, for others it is a symbol of that nation’s corruption and cronyism.”

WWF Global suggests the life of the mine could extend a further 30 years, having devastating consequences for the environment and the local populations. Deforestation, pollution, and flooding are but a few legacies of the mine. The Aikwa River flooding in 1991 destroyed mass areas of lowland forest and “continues to threaten the town of Timika.” Much bloodshed surrounds the history of the mines, which started in the 1970s, including the “extrajudicial killing of as many as 200 people between 1975 and 1997, in and around the Freeport area, almost all of them unarmed civilians,” says the report by WWF.

You can read more on the Grasberg mine here and here.

This Article (Genocide: what the Australian-U.S. and Indonesian Partnership is hiding) is a free and open source. You have permission to republish this article under a Creative Commons license with attribution to the author and AnonHQ.com.