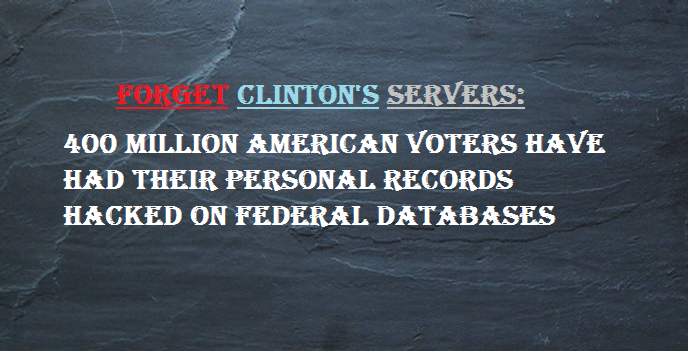 While the media has society transfixed on Hillary Clinton’s email servers, what few are reporting on is the fact that over the course of the last half year, three separate hacks on federal databases have released the private information of over 400 million Americans.

The population of the United States is estimated roughly around 330 million people. When 400 million records have been released in hacks, this number includes a portion of the population who have since become deceased. Remember in many voter fraud cases, dead people somehow cast votes in favor of the winning candidate. But 400 million records in a population of 330 million, you have to think that nearly every citizen who has ever signed up for a vote in the United States in the last 50 years has now had their information hacked – there is even proof.

You do hear about the main stream media talking about federal servers being hacked, jeopardizing national security and peoples safety. Only they are all talking about Hillary Clinton and her infamous emails. Conservatives are calling to abolish federal agencies and for elected officials to resign over past hacks, only they are talking about IRS database breaches. No one is talking about the hacks of the citizens – why?

Clinton’s political rivals are silent to answer to the fact that under their watch – Republicans have control both the House and Senate since 2014 – federal servers hosting the personal information of American citizens have been repeatedly hacked. They are guilty of the same negligence they charge Clinton and the IRS with.

Why is there no mention of this in the main stream media? These hacks are not partisan, they effect everyone. You should be as outraged about these hacks as everyone has been about Clinton’s email servers. Again, all this information would not have been released it was not first required by the government and then stored on their servers. The government had a duty to protect us and failed.

This article (Hacked Voter Registration Databases Exposed 400 Million Americans Personal Records) is a free and open source. You have permission to republish this article using a creative commons license with attribution to the author and AnonHQ. Join the conversations at www.anonboards.com