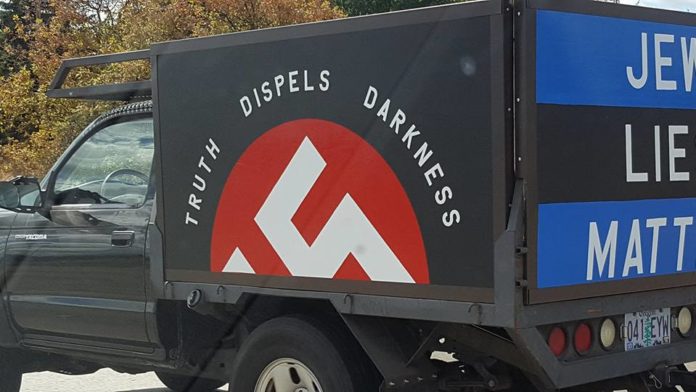 SALEM, OREGON – Jason Kendall, 52, was arrested on Tuesday after attacking KOIN 6 restaurant’s employee, in what is being labelled a possible hate crime.

Kendall entered the Portland restaurant swinging a pipe and yelling “go back to your country, terrorist” and “Arab, you need to leave asshole.” Kendall, after being asked to leave the premises returned moments later and struck the employee with the pipe, leaving an injury to their head. At the same time, Kendall continued his tirade of racist abuse, demanding the victim “get out of America.”

Kendall told the police that an “evil totem,” provoked the attack because it had Arabic writing on it. The totem was also thrown at the victim. He also described to the arresting police that he believed a woman in the restaurant was being held captive as a slave and that he saw a “Saddam Hussein looking guy.”

Kendall faces felony assault, misdemeanour intimidation and the unlawful use of a weapon, reports IBT.

The rise in hate groups in America since 2014 has seen an increase, up from 784 to 892 in 2015. The current number of hate groups, according to the Southern Poverty Law Center (SPLC) is now 917 “active” hate groups, including “193 black separatist groups” counting Nation of Islam.

California leads the way with the highest number of hate groups at 79, while North Dakota, Rhode Island and Vermont have 1 hate group each in their states.

According to the SPLC report, California now leads the nation in hate crime incidence, sitting at 99, while Hawaii reported zero.

The data collected was limited to “real world incidents” only, not online harassment, and unfortunately, the most common setting where the hate incidents occurred was in K-12 schools and colleges.

One documented report comes from the mother of a 12-year-old in Colorado, who recounted her daughter’s experience:

“My 12-year-old daughter is African American. A boy approached her and said, “Now that Trump is president, I’m going to shoot you and all the blacks I can find.”

Retail establishments have also been reported as a common location for hate crimes, reports the study.

Anti-Immigrant; anti-Black; anti-Muslim; Anti-LGBT; Anti-Women; Anti-Semitism and even Anti-Trump incidents were documented in the study.

This article (Hate Are Crimes Rapidly Rising in America) is a free and open source. You have permission to republish this article under a Creative Commons license with attribution to the author AnonWatcher and AnonHQ.com.