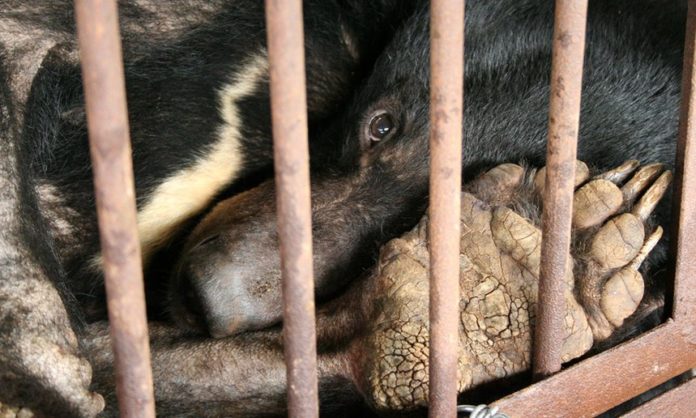 However, tens of thousands of endangered bears in Asia endure intense pain, extreme anxiety, and implausible cruelty caged in unnatural and inhumane conditions due to daily bile extractions. Bear bile farming is extremely cruel; captive bears – which are not slaughtered – die of illnesses such as chronic infections and liver cancer.

“From a welfare perspective, the bear farms are a nightmare. The bears are deprived of social interactions and are poorly treated. Some unlucky bears are confined to “crush” cages so tight they can hardly move.”

“Bears are constantly thirsty and hungry, get little or no veterinary care and essentially are tortured their whole lives. Today thousands of moon bears lie in constant pain and anguish in cages that are no bigger than coffins. A number of crude and brutal methods are used to extract their bile — rusting catheters, barbaric full-metal jackets with neck spikes, medicinal pumps and open, infected holes drilled into their bellies.”

In 2015, a team of MailOnline investigators went inside the cruel Vietnamese bile ‘farms’  only to discover moon bears being kept in tiny 2ft by 4ft metal ‘crush cages’ and were being brutally butchered at a rate of two per day to make traditional Chinese medicine.

They also found that the paws, meat and gall bladders of the moon bears — used by men to increase sexual potency and cure hangovers — were being sold for the equivalent of £625 a bear, and were being smuggled to China for use in traditional medicine (Raw bile can sell for as much as $24,000 per kg, about half the price of gold).

“Packed into rusty metal cages, one of the bears lay motionless on the ground, seemingly giving up hope of ever being rescued. Another rocked manically from side to side and a third had a gushing head wound. A patch of dry ground 20 metres away from the cages was coated with clumps of bear fur.”

Until about 30 years ago, the only way to acquire bear bile was by killing the wild animal and removing its gall bladder. Bear bile farms began in the 1980s in Asia – after North Korea developed the method of bile tapping with catheters. China quickly adopted the practice, followed by Vietnam and Laos, claiming it would promote captive breeding and reduce the need to hunt wild bears for their bile.

Though the government insists it has enforced a “Technical Code of Practice for Raising Black Bears” — which “requires hygienic, painless practice for gall extraction and make strict regulations on the techniques and conditions for nursing, exercise and propagation” — there are currently more than 10,000 bears kept in crush cages for their bile in over 500 farms in China. Here they spend their waking hours biting the iron grills or banging their heads against them.

Although Vietnam outlawed bear bile farming in 2006, people moved their operations over the Laos border. While owning, hunting, and capturing wild bears is banned, illegal farms continue to thrive in Laos. A reporter for The Telegraph described the excruciating method of bile extraction he witnessed in the Luang Prabang farm:

“The farmer pushes the stick into one of the cages and prods the animal head-first towards a lasso-like tether. The bear growls as it is pulled forwards and swiftly injected with an anaesthetic. It throws itself at the bars, snarling.  Once the creature is unconscious, the farmer struggles to lift it on to the operating table. There it is tied to each corner by its paws, exposing its abdomen and chest.

This article (House of Horrors: The Cruel Reality of Bear Bile Farming) is a free and open source. You have permission to republish this article under a Creative Commons license with attribution to the author and AnonHQ.com.