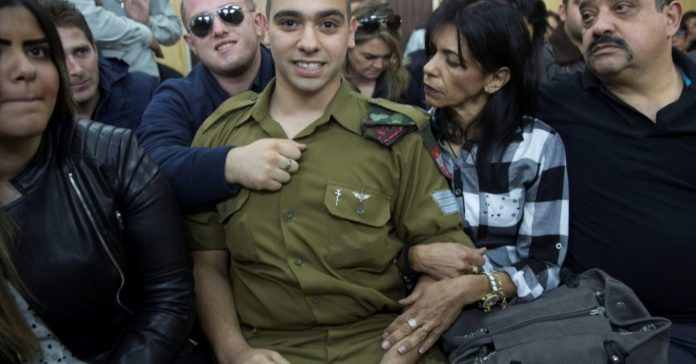 ‘Time and again we have witnessed cases where Israeli forces appear to have carried out unlawful killings, displaying an appalling disregard for human life,’ says rights campaigner.

Israeli Prime Minister Benjamin Netanyahu on Wednesday called for the pardon of an Israel Defense Forces (IDF) soldier who had just been convicted of manslaughter for fatally shooting a wounded Palestinian man last year in the occupied West Bank city of Hebron.

“Sgt Elor Azaria, 20, shot Abdul Fatah al-Sharif, 21, in the head while he was lying immobile on a road,” as BBC News writes. Al-Sharif was allegedly involved in a knife attack against another Israeli soldier and had already been shot, though he remained alive.

Video of Azaria’s deadly shooting, condemned by a United Nations expert as an “extrajudicial execution,” was posted online by Israeli human rights group B’Tselem. In it, as Common Dreams reported at the time,

al-Sharif is seen wounded and unconscious in the middle of the street in the city of Hebron. While al-Sharif lies nearly motionless—though clearly still alive—numerous soldiers, police officers and medical personnel make no effort to administer aid, and largely ignore he’s there at all. After approximately two minutes, a soldier is seen stepping forward, aiming his weapon at and shooting al-Sharif in the head from close range, killing him. “Although this occurs in the plain view of other soldiers and officers,” B’Tselem noted, “they do not seem to take any notice.”

Prosecutors had argued that al-Sharif “represented no immediate threat for the accused or others who were present.”

Judge Maya Heller said she and the other two judges on the panel say “no room to accept [Azaria’s] arguments,” adding, “His motive for shooting was that he felt the terrorist deserved to die.”

“The verdict is a small step in the right direction and offers a glimmer of hope that soldiers who commit unlawful killings may no longer go unpunished,” said Philip Luther, research and advocacy director for the Middle East and North Africa at Amnesty International.

For al-Sharif’s father, Yousri al-Sharif, it “is an achievement of the court that it condemned the soldier.”

Netanyahu, however, said the conviction marked “a difficult and painful day for all of us.” He added, “The soldiers of the IDF are our sons and daughters, and they need to remain above dispute.”

Azaria’s sentencing is scheduled for Jan. 15. He could face up to 20 years.

Israel President Reuven Rivlin may consider a pardon request if one is made, the Associated Press notes, but even if Azaria carries out his sentence, Amnesty’s Luther said, “Sadly, this case is just the tip of the iceberg.”

“Time and again we have witnessed cases where Israeli forces appear to have carried out unlawful killings, displaying an appalling disregard for human life. The authorities’ repeated failure to hold anyone accountable for flagrant violations has fostered a culture in which unlawful killings have become acceptable,” he added.