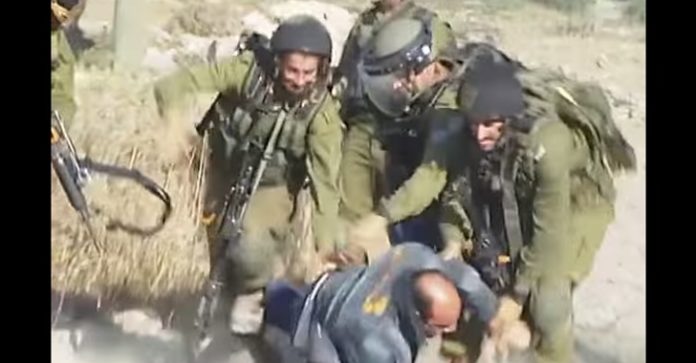 In footage captured by Palestinian media, the unarmed man is shown initially attempting to push the three yelling soldiers away from him. In media reports, one of the soldiers has since claimed that the man tried to grab his gun.

At this point three of the soldiers square up to the man’s face and one attempts to hit him. The group of soldiers continue to surround him, screaming obscenities in his face with one claiming he will  ”f*** his mother if he says one more word.”

After more pushing and shoving, the group of three soldiers becomes six and a loud thud can be heard as the man is hit on the head with a soldier’s rifle.

As he collapses on the floor, another soldier punches him in the face.

With his head clearly bleeding, another soldier kneels on his head, forcing him face down into the dirt while he is handcuffed. The man is then dragged off in a headlock while the IDF continue to use crowd dispersal methods on irate Palestinians.

On Saturday the spokesperson for the IDF made an official response to the incident, saying ”Those [soldiers] involved in the incident were summoned to meet with the brigade commander [Sunday] morning for a clarification and debriefing of the event; if need be, disciplinary action will be taken against them. From a preliminary probe it seems their behavior does not befit that expected of an IDF soldier.”

This incident comes  just one day after an Israeli military investigation cleared its forces of wrongdoing after one of the most controversial incidents in Gaza last summer. The investigation claimed that the killing of four small boys who were playing football on the beach was in error after they were mistaken for Hamas militants.