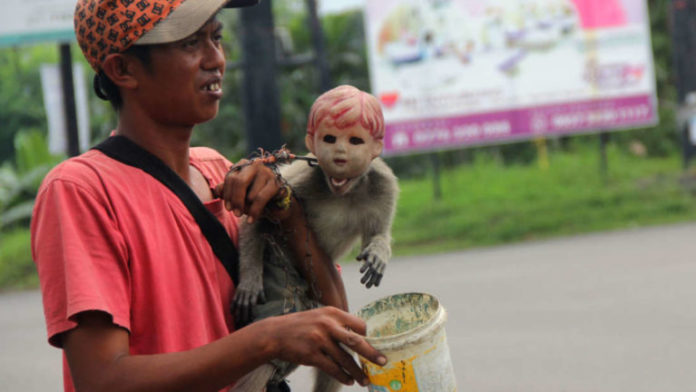 (True Activist) After being stolen from their families at birth, the monkeys have their teeth forcibly removed. They then are tortured until they learn to stand on two feet. Let’s stop this now.

No human would willingly sacrifice their rights to be tortured and paraded around in a silly costume for profit, so why do we place the same expectation on animals? It is a valid question. Perhaps if more people considered it, incidents such as the one that follow would cease to be.

In Boyolali, Indonesia, locals are forcing monkeys to wear doll heads and beg for change. The goal, obviously, is to earn a quick buck. However, the trend isn’t just creepy, it’s absolutely cruel. Unfortunately, abuse in this form is quite common in Southeast Asia. Tourists love to interact, pet and pose with monkeys, which is why some will meet that demand by “breaking” primates. To ensure they are friendly, the monkeys are stolen from their families as babies then sold; this usually occurs before they have finished breastfeeding.

Then, usually without anesthetic, the monkeys have their teeth removed. After surviving this torture, they are chained up and forced to learn tricks, such as riding miniature bikes or smoking cigarettes.

Sadly, that’s not all. The monkeys are tortured in various ways to force them to walk like humans. As IFLScience reports, a chain is tied around their necks, is kept short, and is attached to something nearby. This forces the animal to balance on a stone for hours. If it stops, the creature will choke. While this reality is horrendous, it is changing. This is largely due to the efforts of animal activists and former Jakarta Governor Joko Widodo. In 2014, the practice of exploiting animals for profit was banned. Though this is good news, clearly, it continues to this day.

The main challenge is eliminating the trend completely. To educate locals and tourists, Jakarta Animal Aid Network (JAAN), based in Indonesia, is educating willing listeners about what the monkeys are forced to endure. According to JAAN, 20 percent of the monkeys that are rescued usually have tuberculosis.

Some have hepatitis or leptospirosis, believed to have been caught from humans. When the monkeys come in contact with humans, they then spread the sickness. It doesn’t help that some of the owners “rent” the monkeys to street children who then beg for change. The only way to stop this practice for good is to support the organizations making a difference and to share this article far and wide. Please comment your thoughts below and share this news!