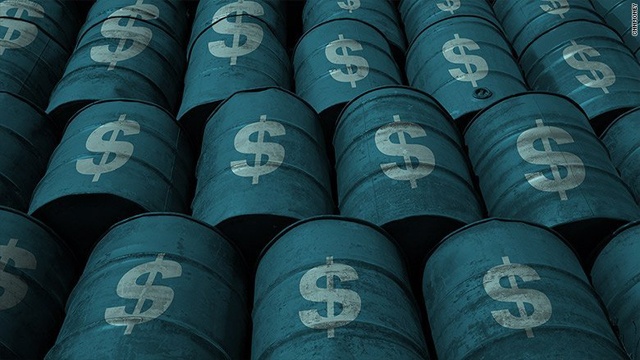 Gaddafi died trying to get rid of the Petrodollar with the plan to introduce his own gold dinar currency for trading oil. Now China, Russia, India, Turkey & co. are planning to trade in their own currencies and coincidentally these countries get in big trouble recently…

A perpetual state of war is the norm in 2016. Enemies are popping up everywhere: first the Taliban and Al-Qaida, now ISIS – the Islamic State. These are but a few of the ‘enemies’ appearing from nowhere – threatening our freedoms and “our way of life.”

But have you really considered and contemplated the true meaning of this ‘way of life?’ What is it that ties us to the War on Terror, the invasions on Iraq, Afghanistan; the unwavering U.S.-Saudi partnership (remember the 9/11 attacks – they were mainly Saudi men responsible) …why wasn’t Saudi Arabia invaded? Why, why, WHY?

The simple answer is oil. Follow the money and you will learn of where the corruption is. It’s a saying we’ve heard of time and again, but is it enough to just offer the excuse ‘oil?’

To understand the reasoning behind some 130 U.S. military bases scattered across the Middle East, is to understand the petrodollar system. It is intrinsically linked to the United States foreign policy – particularly in the Middle East with oil rich nations. The petrodollar is the reasoning behind wars, behind false accusations, behind the CIA-backed coups over the decades. It is the reason for the Iraq wars that left so many devastated, and the reason, I believe, why sanctions are hitting the beltlines of nations like Russia, and prior to, Iran. It may even be the reason for Syria (who has been on the list of “sponsors of terrorism” since 1979)

After all, we couldn’t have the U.S. dollar lose its global dominance…could we? For if it did, the U.S. economy would implode – it would make the 1930s seem like a booming time – and all those who rely on the U.S. dollar…well, the trip would be an equally devastating blast. (Stockpiling those canned goods, I hope).

Have I lost you at the mention of petrodollar system? Good. You’re still here. Or maybe it’s the prepping line I used; regardless, this involves your livelihood too. The petrodollar system, and its history, is rarely mentioned in corporate mainstream media (MSM). For one, it is difficult to get your head around it – especially if you don’t follow world events, history and economics. For the main reason, however, the MSM don’t like to report on the petrodollar system simply because they want you to remain ignorant. Understanding the petrodollar – or “oil for (US-only) dollars” and looking at the world through the petrodollar glass is like unveiling your eyes. Suddenly, you can understand what the hell is going on in this crazy world.

To give you a glimpse, here is a quick rundown of the history, and petrodollar system, and what it means to the United States. It is but a glimpse, but hopefully enough to start you off…

1944: A war weary world convened in the Bretton Woods conference. Forty-four allied nations from across the globe met to discuss the future of the new economic world. From this meeting came an agreement to establish the U.S. dollar (then the strongest) as the global currency, which would also be backed by gold (think of it as an insurance for the financially ruined nations at the time).

From the Bretton Woods conference also came what would eventually evolve into the World Bank, the International Monetary Fund (IMF) and the World Trade Organization (WTO).

All is good in the world for a few years, but then…

1960s: The U.S.-gold backed monetary system begins to cripple the American economy. The “pegged” fixed rate of dollar-to-gold first created a false demand for U.S. dollars, which eventually could no longer be backed in gold. Countries grew suspicious, and by the time the Vietnam War U.S. deficit (200 billion) was realized late in 1971, countries began asking for their gold. The U.S. simply no longer had it. What was once a nation that held 80 percent of the world’s gold, was almost depleted. President Nixon, at the time, had to act – and act quickly.

And then the United States made History – Again…

1971: The U.S. president at the time, Richard Nixon, delivers a speech to the world: there will be no more gold-backed U.S. currency. World currencies now “float” on the market, ending the Bretton Woods agreement.

Henry Kissinger (quite proud of himself, no doubt), Nixon’s Secretary of State, assists in the ‘deal breaker.’


And the BIG Kicker…

1973: To maintain a demand – on a global scale – for the U.S. dollar, similar to that of the Woods agreement, a deal is struck with Saudi Arabia. “Oil for dollars” becomes the new world economy. The Petrodollar System is born.

The Petrodollar deal between Saudi Arabia and the United States is this: (Take note – this is the basis of today’s American Foreign Policy in the Middle East)

For every barrel of oil purchased from Saudi Arabia – from ANY nation – the oil would be purchased in U.S. dollars only.

For those who have ‘foreign’ currency, they would first have to convert to USD before being able to purchase oil.

The exchange for such a lucrative deal comes at a cost that we still pay for:

For Saudi Arabia to agree to the exclusive “oil for dollars” deal, the U.S. promised weapons and military protection. For excess profits made from oil, Saudi Arabia would buy U.S. debt. In short: The United States was to protect Saudi borders (oil) at all costs necessary. (Who was at the time, concerned with Israel, Syria and Egypt).

Now for the SMALLER kickers…

However,… some years after the arrangement, several nations begin to question the validity of such a deal – much like what happened with the “gold for dollars” deal previously.

Nations, such as North Korea, Iran, Syria and Venezuela decide to exit or not take part in the deal. This is also during a time when Russia, China and India turn their backs on the petrodollar system. (Iran’s sanctions commenced in 1979 – remember Syria? They made it to a similar list in 1979 by the same department.)

Terms are coined, such as the “axis of evil,” – a corporate mainstream media favourite.

Then comes Saddam Hussein, 9/11, the War on Terror…

April 2000: A U.S. billion-dollar base built in Qatar – in the event of action against Iraq, rates barely a mention in the media.

September 24, 2000: **IMPORTANT to note: Saddam Hussein announces Iraq oil exports would be exchanged for euro – not USD. The petroeuro plans are in place and Hussein thumbs his nose at American-Saudi deals.

March, 2001: Pentagon documents how Iraq oilfields would be “carved up” and outsourced to western companies.

September 2001: The 9/11 terrorist attacks occur. Already, not everyone is convinced this is so straight forward, but the media churn into action, quickly pointing fingers at Afghanistan and Iraq, yet most attackers were already known to be Saudi.

2001: Bush ignores Saudi ties to attacks, instead, hunts for reasons to invade Iraq and continually presses the CIA for a link; links Iraq’s Hussein to bin Laden – but with no credible sources. Mainstream media perpetuates the Bush administration line: Hussein is guilty of attacks by association. The U.S. must war with Iraq and Afghanistan. The ‘War on Terror’ commences in the name of freedom and democracy. Yes, he was telling the truth – the oil buys America a lot of cheap deals, props up the U.S. economy and is an excuse to print dollars to supply to those who want to buy oil. So, Bush wasn’t lying in that regard…was he?

2002: The petrodollar is dumped. Saddam Hussein’s petroeuro is now in full swing – almost. This essentially means that if Europe were to jump on board, the 1973 U.S.-Saudi deal would be on shaky grounds. By March 2003 Bush announces war with Iraq after much media hype, and by June 2003, Iraq’s oil is suddenly trading under the petrodollar again. So what does all this mean?

The run down I have given you is far from exhaustive and has taken weeks to compile. And it’s the government intention. The words ‘Petrodollar System’ tend to make one’s eyes glaze over, but if you are interested at all in the current international climate from Russia to Israel, Iran, Syria to the Middle East, China and North Korea – you best inform yourself of the Petrodollar.

If the Petrodollar failed tomorrow, the United States would most likely collapse, economically speaking, and it [hyperinflation] would do so with such force unprecedented, it would be unstoppable. Those who don’t deal in U.S. dollars would most likely thrive. Superpowers would change, the world would be a different place. The United States would lose their standing. It is the ultimate text book fall of an Empire, and history has demonstrated similar in the past.

The Petrodollar Wars, a term you have most likely heard may very well encompass the Syrian war today. Syria, along with Iran, to my knowledge are the only two countries who don’t take U.S. dollars for their oil – so they are a threat, small as it is. Obama has just vetoed any chance of families suing Saudi Arabia for involvement with the 9/11 attacks…

It is with that, I leave you to think…

This article ([Investigative] Why the World Can’t Rest: The Petrodollar) is a free and open source. You have permission to republish this article under a Creative Commons license with attribution to the author AnonWatcher and AnonHQ.com.