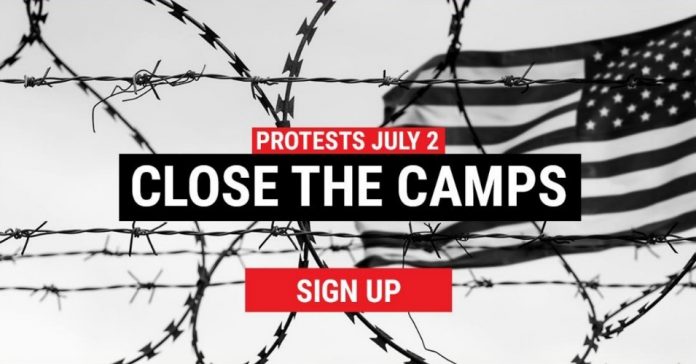 (Zero Hedge) Amid reports of severe abuse and neglect in the immigrant detention centers the Trump administration is running, human rights campaigners are planning hundreds of demonstrations on Tuesday to demand the closing of the prisons and the reunification of all families who have been separated by the government.

MoveOn was joined by the ACLU, the Center for Popular Democracy, and other organizations in planning at least 184 events in cities and towns across the country. Beginning at 12:00pm local time and throughout the afternoon, critics of President Donald Trump’s immigration policies will assemble outside their representatives’ offices and at other public venues for the #CloseTheCamps protests.

The organization provided a map on its website of the events that have been planned so far.

“It’s going to take all of us to close the camps,” MoveOn wrote.

The delegation reported that the immigrants they spoke with were living in cramped cells where they slept on floors, had not had access to medications or been able to bathe in weeks, were in a state of emotional turmoil, and were exhibiting health problems including hair loss.

“We’re talking systemic cruelty [with] a dehumanizing culture that treats them like animals,” Ocasio-Cortez said of what she witnessed in the camps.

“Horrifically, these conditions aren’t an accident,” wrote MoveOn. “They are the byproduct of an intentional strategy by the Trump administration to terrorize immigrant communities and criminalize immigration—from imprisoning children in inhumane conditions to threatening widespread raids to break up families to covering up reports of immigrants dying in U.S. custody and abuses by ICE and CBP agents.”

MoveOn wrote that the three demands of Tuesday’s protests include cutting off all funding for the arrests and deportations of immigrants as well as closing the camps.

“It’s time to fight back against the racist regime that is causing suffering in our name,” tweeted Act.tv, a progressive activism network supporting the demonstrations. “History will remember those who stood against the atrocities.”