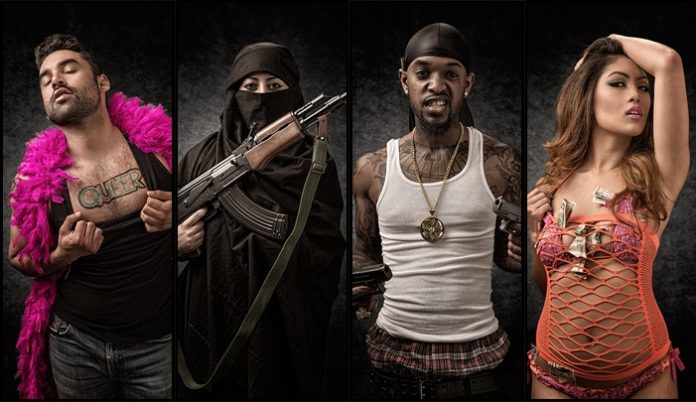 We all judge people and label them on the basis of their race, ethnicity, religion, socio-economic status and sexual orientation. Joel Parés, a US Marine-turned-photographer from Puerto Rico, has highlighted these prejudices in his new photo series, Judging America. The message is simple enough: Don’t judge a book by its cover. Every black man is not a gangster, every Muslim is not a terrorist, every southern, white man isn’t a Ku Klux Klan member AND successful, talented and good souls come in all professions, nationalities, and colors.

“I just wanted to clarify that it is that many of us judge incorrectly by someone’s ethnicity, by their profession, and by their sexual interest. The purpose of this series is to open our eyes and make us think twice before judging someone, because we all judge even if we try not to. The first image is not necessarily what you actually see, but it is what you categorize them in your head without knowing who they truly are. The second image explains the truth about the person and how incorrect they were judged initially,” Joel told Huffington Post.

“The way I like to show the series is where you view the judged image first, to fuel the fire inside of some of us, and then the reality image to cool down the fire and open the eyes of those who think in a negative way while judging individuals. My inspiration for this series is the fact that America is a country that is very diverse with many ethnicities that together create the United States of America. I believe every individual deserves a chance at a normal life without being judged in a negative way. I wish everyone could be treated equally, and this is my voice crying out for change,” he told photography blog, Fstoppers.

The message is clear: KNOW someone before you begin to label them under a certain category…