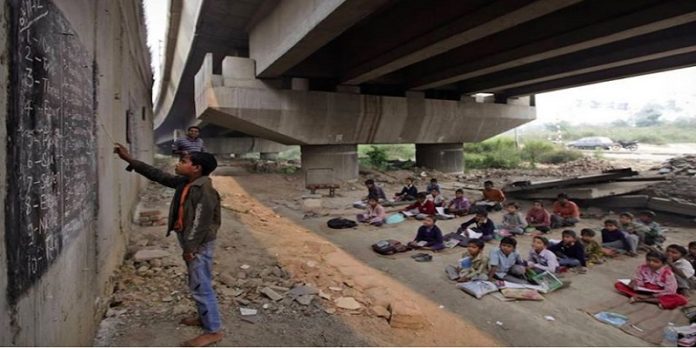 Rajesh Sharma wasn’t able to finish college due to financial difficulties, so now he educates young children in an effort to help them overcome poverty.

In many third-world countries, education is inaccessible due to the high cost of books, school uniforms, and tuition. In addition, families often rely on their offspring to work on their farms to help provide extra income. This is a travesty, considering that education is vital to helping reduce poverty.

Because as many as 115 million children of primary school age are not enrolled in school, some activists have taken it upon themselves to share free education – often in unconventional locations and ways – to help the young overcome poverty.

One such individual is Rajesh Kumar Sharma, who has created a free school underneath a bridge in India. For two hours every week day, the activist leaves the general store he works at – his brother fills in for him – and educates approximately 30 kids each day. Many of the pupils come from neighboring poor villages.

Sharma has a wife and three daughters to look after, but he feels compelled to help the children who don’t have access to school because he himself was forced to drop out of college due to financial difficulties. He believes education is a universal right, and wants to help youth in the area gain the necessary skills to live productive, happy lives.

It took a bit of effort and persistence, but Sharma was able to persuade local laborers and farmers to allow their kids to attend. He noticed that kids were spending the majority of their time in the fields or sitting idly, waiting for work.

A year ago, Sharma was teaching 140 students. Eventually, he was able to persuade local authorities to admit 70 of them into government schools. One student, Abhishek, 15, told the Indian Express:

“Our teacher has told us that when poverty strikes, you should open your mind, and that can be done only through education.”

According to Sharma, his greatest achievement so far has been to change the general attitude many parents hold toward education. Reportedly, many of them now encourage their children to study. They have adopted the belief that if their children can participate in the makeshift school, it might be possible for them to go to established schools in the city.

Learn more by visiting the ‘Free School Under The Bridge In Delhi‘ Facebook page!

This article (Kind Activist Teaches Underprivileged Children For Free Underneath Bridge In India) is free and open source. You have permission to republish this article under a Creative Commons license with attribution to the author and TrueActivist.com