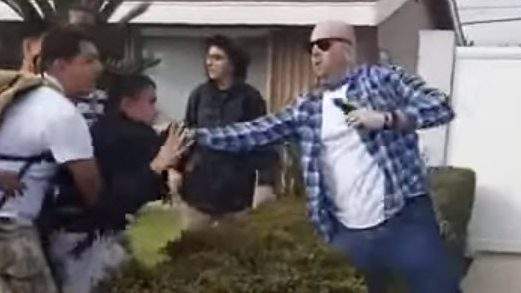 An off-duty LAPD officer was captured on cell phone video pulling his gun during a confrontation with a group of children. The officer, who has been unnamed, can be seen pulling on the jacket of a student and attempting to pull him over a hedge. When other students come to the student’s defense, he pulled his gun on them and fired a shot.

According to reports, the incident occurred in Anaheim, outside the officer’s jurisdiction. The group of students, who can be seen carrying backpacks, allegedly walked across the officer’s lawn. This prompted a typical yet over-zealous response from the officer, who felt force was necessary to get his point across.

The Anaheim Police released this statement: “The confrontation began over ongoing issues with juveniles walking across the officer’s property.” So, it’s clear that the problem he had was not particularly with this group of kids, it was simply pent up frustration over what other kids had done previously. You can clearly see the officer, who never identified himself to the kids and never produced a badge, pull a gun from his waistband and fire a shot. It is unclear where the shot went, however, since an officer fired a weapon, LAPD’s homicide unit was tasked with the investigation. According to the teen who was assaulted and later charged with making criminal threats and battery, the man never said he was a cop and “came at him.” The officer yelled a negative comment to one of the female’s in the group, to which the teen in question yelled, “That’s not how you treat a lady.” It was at this point the officer grabbed him.

The teen tried to run to the street, but according to him, the officer hit him and kicked him in his testicles. The officer must have made a statement to police that the teen stated he was going to shoot him, as a defense for firing his weapon. The boy told the media that he yelled he was going to “sue him” not “shoot him.” The teen’s family has already obtained a lawyer and plans to file a lawsuit against the officer.

The Anaheim Police Chief wouldn’t confirm or deny the cell phone video as that of the incident, however, “We are aware of numerous videos being posted on YouTube and other internet sites. We cannot authenticate the validity of these videos as they were not recorded or posted by APD. However, they do appear to depict portions of the incident in question.”

Protesters took to the corner of where the incident occurred on Wednesday night. According to the media, over 300 people turned out to protest the unlawful treatment of a child. The fact that the kids involved were arrested but the officer was not, was a primary factor in the protest.

According to Anaheim police, 24 people were arrested for “failure to disperse” after being instructed to leave. According to Anaheim Police Chief Raul Quezada, “As a father and as a police chief, I too am disturbed by what I saw in the videos that were posted on the internet.” Despite his alleged “disturbed” state, he justified his failure to arrest the unnamed officer, claiming there was insufficient evidence. Fortunately, the DA will have the final say. The teen’s mother appeared on a local newscast in which she stated that she had heard from the District Attorney, who rejected all charges against her son and planned to free him. This comes in direct contradiction to the statement released by the Anaheim PD, who stated they will follow through on the charges. The fact that the DA rejected the charges so quickly is a good indicator that they believe the officer was the one responsible for instigating the entire event.

This article (LAPD Off Duty Officer Captured in Viral Video NOT Arrested Due to “Insufficient Evidence”) is a free and open source. You have permission to republish this article under a Creative Commons license with attribution to the author and AnonHQ.com.