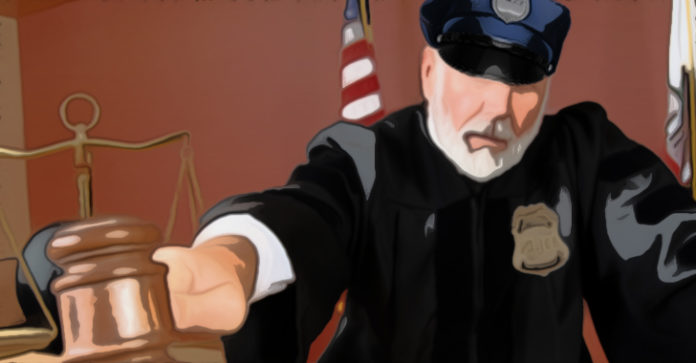 Denver, CO — Last week, a Denver man was arrested and charged with multiple felonies, but not for stealing, committing fraud, or engaging in violent crime. He was targeted for attempting to educate jurors about their rights in the courtroom.

Mark Ianicelli, 56, set up a table outside of Lindsay-Flanigan Courthouse in Denver in order to educate jurors about jury nullification. Jury nullification is the process by which members of juries can nullify unjust laws by finding defendants charged with them not guilty.

Ianicelli is charged with tampering with a jury, a felony in Colorado that carries a minimum bond of $5,000. He was charged by the Denver District Attorney for seven counts of tampering, and has since bailed out of jail. Ianicelli was in the second day of a planned three-day outreach to educate jurors entering the courtroom about the power of jury nullification. He was handing out fliers when he was arrested. His goal was to inform potential jurors about a vital, centuries-old function of juries.

The practice was first used in America in 1735 to exonerate a man of libel charges after he printed unflattering statements about the Governor of New York (a British colony at the time). Though he had undoubtedly printed them, the jury found him not guilty and set the precedent that members of juries could judge the morality and legitimacy of laws.

The United States’ first Chief Justice, John Jay, once told jurors, “You have a right to take upon yourselves to judge [both the facts and law].” Jurors would seize this right to nullify anti-sedition laws in the early 1800s that attempted to stifle free speech criticizing the newly formed United States government.

Judges first began cracking down on the right to nullify in the late 1800s. By that time, jurors had already used nullification to challenge the Fugitive Slave Act, which imposed heavy punishment on Northerners who aided escaped slaves from the South. Though judges came to discourage nullification, the practice went on to be useful in nullifying Prohibition-era laws.

Jury nullification still affects prohibition against outlawed drugs. In 2012, a New Hampshire jury acquitted a Rastafarian man, Doug Darrell, of growing marijuana—though he was technically guilty of the violation. The jurors had been informed of their right to nullify and found the law and charges against Darrell to be unjust. They found him not guilty.

However, this power of the people has not gone unchecked. Though some states allow for the practice, judges often fail to notify jurors of their ability to nullify. Activists have been harassed and jailed for attempting to inform jurors of their right to judge the morality of laws.

The Fully Informed Jury Association (FIJA), a non-profit organization that educates jurors on their rights (and whose pamphlets Ianicelli was handing out when he was arrested), is one group that attempts to counter these suppressions by the justice system.

Kirsten Tynan of FIJA reported on Ianicelli’s case, stating that officials in Denver claimed a juror had complained about Ianicelli’s presence near the courthouse, prompting his arrest. Tynan was told Ianicelli was arrested on charges of jury tampering, which according to Colorado law, consists of:

“(1) A person commits jury-tampering if, with intent to influence a juror’s vote, opinion, decision, or other action in a case, he attempts directly or indirectly to communicate with a juror other than as a part of the proceedings in the trial of the case.

(1.5) A person commits jury-tampering if he knowingly participates in the fraudulent processing or selection of jurors or prospective jurors.

Though Tynan acknowledged that under some circumstances nullification activism is not legally permissible, it appears Ianicelli was within his rights. He is due back in court on August 11 to face his victimless felony charges.

It is more than alarming that a man attempting to facilitate and strengthen the judicial process is punished with the full force of the law—the very thing Ianicelli sought to educate jurors about. As Harlan F. Stone, the 12th Chief Justice of the U.S. Supreme Court said in 1941, “The law itself is on trial quite as much as the cause which is to be decided.” When the justice system refuses to allow jurors to be aware of their rights, let alone exercise them, the country’s entire system of “law and order” is called into question.

*Update: On Wednesday, FIJA obtained the government’s “Complaint and Information and Statement of Probable Cause” filing against Ianicelli. You can view an analysis of the charges here.

This article (Man Arrested, Charged with Multiple Felonies for Telling Jurors About Their Rights) is free and open source. You have permission to republish this article under a Creative Commons license with attribution to Carey Wedler andtheAntiMedia.org.