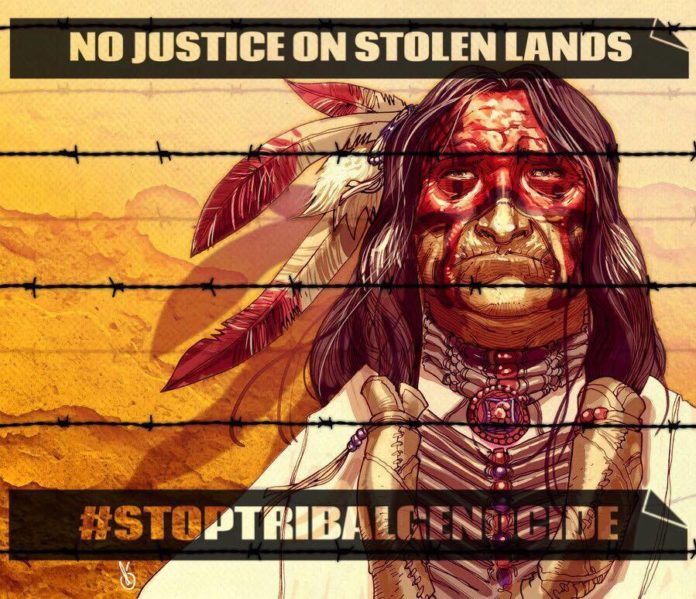 Preserving the existence of our Tribes is our top priority and we are uniting to fight against all issues in Indian Country on Thursday, October 6-7, 2016. No more Tribal disenrollment, No more pipelines, No more fracking, No more treaty rights violations, no more identity theft, no more Columbus Day, no more mascots, no more police brutality. We are demanding the U.S. government and the Bureau of Indian Affairs to acknowledge their Federal trust responsibility that extends to the Native American communities.

The Native Rights Matter March is a civil rights event protecting the rights of Native Americans that have been violated by the Federal government, the Bureau of Indian Affairs and corrupt Tribal leaders and governments. We have struggled for centuries to protect our heritage and existence against the never ending threat of cultural genocide by the government and mainstream society. Our ancestors sacrificed a lot, even their lives, so that we could continue to exist. By allowing the continued genocide and rights violations of our people, our cultural preservation is not being honored, but rather being attacked and we are doing whatever we can to make sure that this atrocity to our sacred culture does not continue. On Thursday, October 6th our speakers will focus on the following topics:

Imagine having your citizenship taken away from you. That’s what happens when a member of a Tribe is disenrolled, or kicked out of their Tribe by their Tribal government, even if no criminal accusation was ever made. Throughout Indian Country, Tribal officials have been taking actions which have denied and/or stripped over 12,000 individual Natives of their citizenship rights and privileges as Tribal members and denied them Federal benefits and programs in the areas of housing, education, health, voting and public work assistance. In most cases, these tribal citizens have been stripped without due process. The U.S government, as a Federal trust responsibility, is supposed to protect the thousands of individuals whose rights have been infringed upon. Unfortunately, The Bureau of Indian Affairs has determined that their trust responsibility extends only to the Tribal Government and government officials and not the thousands of individual Native victims. In some cases, the illegal actions occurred decades ago, however, there has been a significant increase since Indian gaming has evolved into a multi-million-dollar business empire. Tribal disenrollment is a threat to our identity and cultural genocide to our future generations. There is no honor in taking away an individual or family’s cultural and spiritual heritage because of political corruption and greed.

Water is sacred. Water is life. Currently, the Dakota Access Pipeline has proposed a crude pipeline which crosses treaty territories, threating the Missouri and Cannon Ball Rivers. This pipeline’s construction is being carried out without the Tribe’s free, prior and informed consent in direct contradiction to their clearly expressed wishes. The Dakota pipelines violates tenets of the U.N. Declaration on the Rights of Indigenous Peoples, including the right to health, right to water and subsistence, threats against sacred sites including burial grounds (NAGPRA), treaty rights, cultural and ceremonial practices. When this pipeline leaks it will destroy the water and land. We must protect our future generations.

As keepers of the world, we have major concerns about chemicals being injected deep into the ground to bring natural gas and oil to the surface. Oil production is starting to displace the Tribal culture based on agriculture and gazing livestock. Unfortunately, in certain cases, neither investment nor oil revenues have been able to guarantee safety among our water, lands, cultural, tribal resources, economic growth or poverty reduction within our neighboring reservations. Thus, the presence of major oil and gas industries has been associated with a variety of negative and social environmental outcomes. Today, the oil rush is jeopardizing our remaining sacred lands. We must protect our land, water, and the health of residents and the environment for now and future generations.

Indigenous communities are fighting their most important battles in recent history. Battles to protect the integrity of their land and water traditions. The treaties are the heart of these battles. Article VI, Clause 2 of the U.S. Constitution, also known as the Supremacy Clause, lists these treaties as the “Supreme law of the land.” These legally blinding contracts contained promises that recognized Tribes rights to live self-governed and undisturbed on their own land, with religious freedom; to hunt, fish, and gather natural resources; and to have benefits such as healthcare, education, and in some cases financial payments for lands previously sold to the government. These treaties, on a daily basis, are being violated.

The BIA’s federal acknowledgement process (FAP) is not unique; it’s typical of a process that’s been described as broken, long, expensive, burdensome, intrusive, unfair, arbitrary and capricious, as well as less than transparent, unpredictable, and subject to undue political influence and manipulation. It reflects a culture of neglect on the part of the Federal government, indigenous leaders and others involved in recognition efforts. Often Tribes rights are violated due to not being federally recognized by the federal government despite the fact of an Indian Treaty being in place.

For Native Americans, Columbus is not a typical holiday. Columbus was not a hero. There is no honor in celebrating slavery, greed, cruelty, genocide and arrest of indigenous peoples. The legacies of colonialism are still alive when the federal government refuses to acknowledge Natives as the first people.

The invisibility of Native peoples and lack of positive images of Native cultures may not register as a problem for many Americans, but it poses a significant challenge for Native youth who want to maintain a foundation in their culture and language. We must end the negative and harmful stereotypes in the media and popular culture, especially sports.

The Indian Child Welfare Act (ICWA) is a federal law that passed in 1978 in response to the alarmingly high number of Indian children being removed from their Native homes by both public and private agencies and placing our children into Non Native homes for foster care and adoptions. ICWA sets federal requirements that apply to state child custody proceedings involving an Indian child who is a member of or eligible for membership in a federally recognized tribe. When disenrollment happens involving children, this puts our native children at the highest risk of being fostered out and or adopted out to Non Native homes. The law no longer protects the indigenous child due to being severed from their tribal lands and people caused by reckless tribal governments that use the tools of disenrollment.

Here are the details of the event we have so far:

Thursday, October 6, 2016
Meet at the California State Capitol
1315 10th Street Sacramento, CA 95814 at 12 noon for speakers, dancing and food. Speakers will be first on the agenda. We will be marching around the Capitol as well. So wear comfy shoes and bring a jacket for the crisp fall air. Tribal disenrollment injustices and Tribal council’s abuses are infecting Tribes around California in blatant fashion and the BIA has been turning their backs on the assimilation process.

Demand the BIA to hold Tribal councils accountable for their abuses and stop the identity theft of bona-fide Native Americans, our allotted lands and our stolen prepaid federal Indian benefits that our ancestors gave their rights up for! Our civil rights are at stake!

We are asking for justice and demanding that the Bureau of Indian Affairs holds accountable these corrupt Tribal leaders that rights have been violated thru disenrollment.

We want to united all of our Native brothers and sisters together and warrior up, fight for our civil rights and our right to protect our cultures from those who would rip it away from us.

Meet in front of the Bureau of Indian Affairs 2800 Cottage Way, Sacramento, CA 95825 from 7:30am -2 pm. Please bring your voices, songs, drums, clapping sticks, picket signs and chants. Be ready to protest and share our grievances about disenrollment. Our intention is to close down the front street of the BIA and have Native disenrollees share their stories.

The above article is text from the event Facebook page: