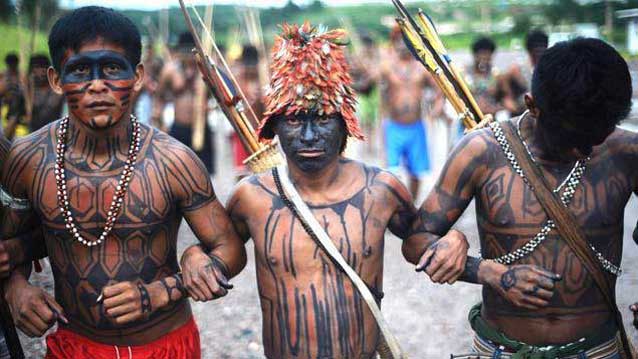 Altamira, Brazil — Brazil’s environmental authority has approved an operating license for the Belo Monte Dam despite evidence the project may harm the lives and health of indigenous communities. The Interamerican Association for Environmental Defense (AIDA) reported:

“The Brazilian Institute of Environment and Renewable Natural Resources (IBAMA) on Tuesday authorized the Belo Monte Dam’s operating license, which allows the dam’s reservoirs to be filled. The authorization was granted despite clear noncompliance with conditions necessary to guarantee the life, health and integrity of affected communities; the same conditions that IBAMA called essential in its technical report of September 22. IBAMA’s decision makes no reference to conditions needed to protect affected indigenous peoples.”

The license will allow two of the dam’s reservoirs on the Xingú River in the Amazon to be filled. It is valid for six years and is contingent on the project complying with certain conditions.

Antonia Melo, leader of Movimiento Xingú Vivo para Siempre, called the decision a crime. Melo was personally displaced by the dam’s construction. “Granting the license for this monster was an irresponsible decision on the part of the government and IBAMA. The president of IBAMA was in Altamira on November 5 and received a large variety of complaints,” Melo told AIDA.

“Everyone – riverside residents, indigenous representatives, fishermen, and members of the movement – talked about the negative impacts we’re living with. And now they grant the license with more conditions, which will only continue to be violated.”

“The authorization clearly violates Brazil’s international human rights commitments, especially with respect to the indigenous communities of the Xingú River basin. Those affected populations are protected by precautionary measures granted in 2011 by the Inter-American Commission on Human Rights, which the Brazilian government continues to ignore,” said María José Veramendi, an attorney with AIDA.

International groups such as AIDA, Justiça Global, and the Para Society of Defense of Human Rights are calling for the project to “guarantee affected and displaced populations access to essential services such as clean water, sanitation, health services and other basic human rights.”

Approval for the Belo Monte Dam comes less than a month after two other Brazilian dams burst, causing massive environmental damage. On November 5th, two dams ruptured at an iron ore mine operated by Samarco Mineração SA, a mining company jointly owned by Vale, a Brazilian corporation, and Australia’s BHP Billiton. The disaster caused the deaths of fourteen people while another 500 were displaced from their homes. The dams are known as tailing dams, which are designed to hold water and waste from the iron ore mine.

“The sheer volume of water disgorged by the dams and laden with mineral waste across nearly 500 km is staggering: 60 million cubic meters, the equivalent of 25,000 Olympic swimming pools or the volume carried by about 187 oil tankers.”

The spills also affected indigenous communities in the area.

The Belo Monte Dam will become functional without the approval of the local community and those who are already being affected. Violations like these will continue to occur as long as the world’s political institutions do not recognize the humanity in all life. Indigenous and Native peoples across the world continue to be deemed second and third class citizens, rarely worthy of consultation or respect.

For the theft and destruction to Native communities and the planet itself to halt, those who are awake amongst the sleepwalking must speak up and resist the machine. If you do not support the system that oppresses your brothers and sisters, stop funding it, stop participating in it, and start building the future we all need.

This article (Massive Dam to Begin Operations Despite Outcry From Indigenous Communities) is free and open source. You have permission to republish this article under a Creative Commons license with attribution to Derrick Broze andtheAntiMedia.org. Anti-Media Radio airs weeknights at 11pm Eastern/8pm Pacific. If you spot a typo, email[email protected].