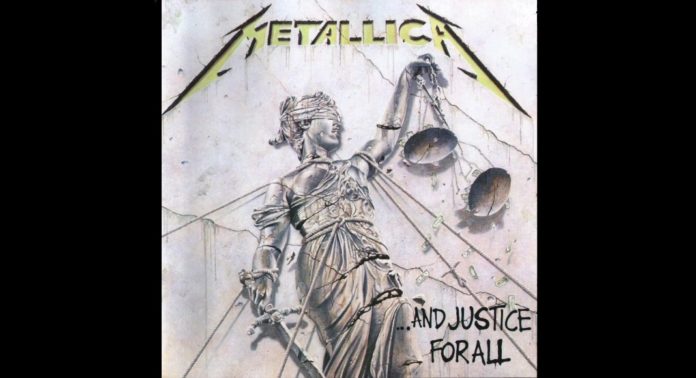 In August 1988, Metallica released their fourth studio album: “…And Justice for All.” It provided a harsh, yet realistic look into the corruption of politics and injustice within the legal system. For generations since, it has helped to awaken the minds of the young and old alike. Yet it has become part of a dying genre of music that encouraged political movement and deep thought.

It was at a very young age this Anon was introduced to what is now termed “old-school Metallica.” While others of the same age listened to songs about hugging, sung by their favorite cartoon characters, another majority of us were learning that the world is a very complicated place. We developed an appetite for truth, and a resolve to challenge unhinged authoritarianism.

In July 2016, we republished an article by the Anti-Media on the band ‘Tool,’ and the lessons they teach us about humanity. From religion to consciousness itself, Tool has played an important role in opening their listener’s minds beyond the confines of physical reality. While we are glad to report that Tool has another album in the works, bands such as theirs have become rare jewels in our modern age of sex, violence and materialism.

Art, especially music, provides a multifaceted and powerful service to society. It is a medium for the profound expression of self, as well as a form of therapy, entertainment, and a mechanism capable of bringing strangers together through a common love and passion for art. But most importantly, artists can help us understand the world around us by articulating thoughts and emotions through pictures and sounds that help us further connect with ideas.

Over the last few decades, the quality of music has declined. The 1990’s to early 2000’s saw the last big bang of political activism and philosophy in rock music with bands such as ‘Rage Against the Machine’ and ‘System of a Down.’

According to Billboard.com, the number one rock song in the U.S. for the week of February 18th-24th 2018, is “Thunder” by ‘Imagine Dragons.’ It’s definitely not this Anon’s idea of rock music, but that aside, the song has no meaningful message whatsoever.

Spoken from the perception of the lead singer, the song outlines his desire from childhood to be a rock star. In a typical pompous fashion, the lyrics finish by reminding the listener that the band made it to the big-time while “you were clapping in the nosebleeds.” The main chorus, and in fact an annoying majority of the song, is literally one word spoken over and over again:

One may wonder how this counts as music, or how it made number one on the charts, for that matter. But you can’t blame the people when their choices are limited. Where have our political and philosophical rock bands gone?

While previous Metallica albums, such as ‘Ride the Lightening’ and ‘Master of Puppets,’ contained sophisticated lyrics with political messages, ‘…And Justice for All’ directly focused on issues such as war and censorship. The album’s opening song, “Blackened,” immediately brings attention to our destruction of the earth:

“Blackened is the end. Winter it will send. Throwing all you see into obscurity. Death of Mother Earth. Never a rebirth. Evolution’s end. Never will it mend, never.”

The song “…And Justice for All,” which the album is named after, paints a powerful picture of our justice system. While individuals such as Noam Chomsky may have, at that time, understood the corruption in the system, the average American was still very much blinded. This was well before the coming of Edward Snowden and Julian Assange, and before political figures like Bernie Sanders and Jill Stein became household names. Both Sanders and Stein, of course, being among the very few politicians to speak out about money in politics, including the fact you have to buy your freedom.

The main chorus of the song continues:

“Justice is lost, justice is raped, justice is gone. Pulling your strings, justice is done. Seeking no truth, winning is all. Fighting so grim, so true, so real.”

The “Eye of the Beholder” addresses censorship, and all the various ways we silence ourselves. Telling the truth often comes as an offense to others, and therefore we tend to omit our personal opinions. Fear can also lead a person to silence themselves, as well as lack of trust. The main chorus of the song is as follows:

“Doesn’t matter what you see, or into it what you read. You can do it your own way, if it’s done just how I say.

Finally, this report would not be complete if we didn’t bring attention to the anti-war song “One.” The song is written from the perception of a WWI soldier who was severely injured, and unable to communicate. In constant pain, the man begs god to take his life:

“Fed through the tube that sticks in me, just like a wartime novelty. Tied to machines that make me be. Cut this life off from me.

Many argue that, like our educational system, our music has been redesigned to inhibit free thought, and discourage political participation. At one point in time, music was a gateway to political activism, and a tool (no pun intended) to expand one’s mind. Today’s music, on the other hand, provides our youth with no meaning or purpose, aside from trying to “tap that ass” as much as possible.