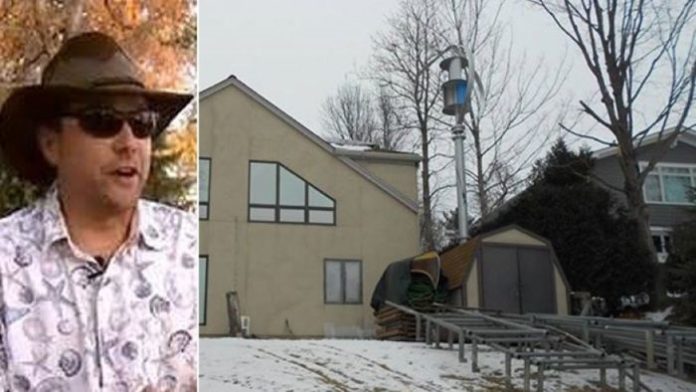 A man from the city of Orono, Minnesota, was sentenced to six months in jail for refusing to completely remove a wind turbine that he had installed on his property to harvest clean energy.

The man, Jay Nygard, was put behind bars in October 2015.  According to media reports, Mr Nygard is a known clean energy advocate, founding Go Green Energy. His company makes solar panels, hot water systems and attic fans, as well as turbines that mount onto roofs or stand freely, like the one he built that resulted in his prison sentence. Nygard is said to have built a 29-foot-high wind turbine on his property in 2010, to make personal use of the clean energy that the machine generates. When Nygard was about to erect his wind turbine, he was reportedly denied the appropriate permits by city officials.

The city officials said then, the turbine violated so-called zoning laws, and that it made neighbors uncomfortable. Zoning is the way government controls the physical development of land and the kinds of uses to which each individual property may be put to.

But Nygard and his lawyer held that the wind turbine was similar to light poles or basketball hoops erected without needing city clearance. He erected the wind turbine, which was generating clean power for his house. City officials then demanded he take the turbine down, going further to pass a new law banning wind turbines within the city limits.

After passing the draconian law, the city then dragged Nygard to court. The court ruled that the city cannot ban residents from erecting wind turbines to harness wind energy. However, strangely, the court also ruled that Nygard take down his wind turbine because it caused disturbances to his neighbors, despite being situated on his property.

The court battle carried on for over a year. As a law abiding citizen, Nygard did eventually remove the turbine, leaving only the cement base – because removing it would cause structural damage to his house.

However, not to let matters rest, city officials demanded he remove the base of the structure. It is said three different engineers advised city officials that removal of the base would cause damage to Nygard’s house. Yet, the city refused to heed to this advice. The city went back to court. The court ordered the base of the structure to be removed. When Nygard was still contemplating on how best to remove the base without causing damage to his house, he was arrested and taken into custody, and later put before the court for contempt charges. The court sentenced Nygard to six months for not complying with a previous court order to remove the base.

The Nygard family told local media that the sentence was a display of unfair treatment. According to them, the ruling was not done in accordance with the law. They told how they were in the process of removing the base, when Nygard was arrested by the police.

“He was arrested, handcuffed, and taken to jail. Tonight will be night No. 4 in jail. That was the best place to harvest the wind on our property. We don’t have a very big property. I don’t know where else we could have put it,” Kendell, Nygard’s wife said.

But despite being sentenced, Nygard still operates three smaller wind turbines on their property. The family said they believed they would be able to keep them, in order to generate clean energy. Governments around the world are encouraging their citizens to harness clean energy. However, it is unclear why in the United States, people would have to follow needless bureaucracy before being able to do something they have the right to do.

Nygard has the right to do whatever he wants with his own property, but unfortunately, in a democracy such as the United States, the property rights of an individual can be overridden according to the whims of politicians and the demands of uninvolved third parties, irrespective of the potential benefits, such as clean energy.

This article (Minnesota Man gets Six Months in Jail for Harvesting Wind Energy on His Property) is a free and open source. You have permission to republish this article under a Creative Commons license with attribution to the author and AnonHQ.com.