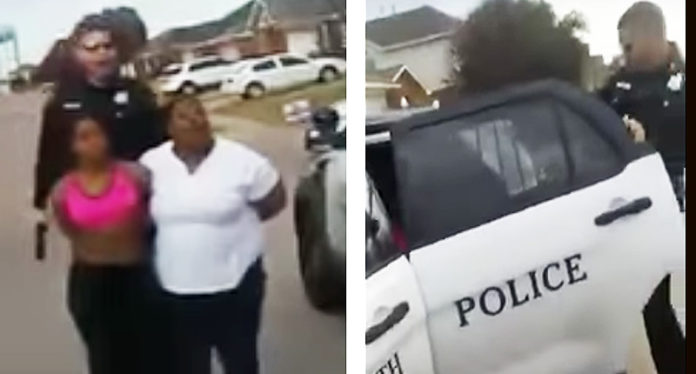 New body cam footage has been leaked, showing the point of view of the Fort Worth officer who found himself in trouble after roughing up a mother and daughter. The Fort Worth Police were quick to discipline Officer William Martin, handing down a ten day suspension. However, after all the documents and evidence have been reviewed, it is clear that Officer Martin needs to be terminated and charged. The body cam footage shows criminal activity on the part of Martin, above and beyond what the cell phone recording portrayed. Besides the misconduct captured on video and now seen by the world, Martin told numerous lies in his report in an attempt to cover up the incident. Jacqueline Craig and her family have hired attorney Lee Merrit, a clear indicator that a lawsuit is looming. They have made several demands of the city. First and foremost, they demanded that Martin be fired. The numerous lies he told to cover up his actions constitute a loss of credibility in the community. They also want him criminally charged with perjury, false arrest and official corruption. Almost immediately after the video was leaked, all charges against Jacqueline Craig and her two children were dropped. Merrit cites the police report. “While he was handcuffing Jacqueline Craig, Brea Hymond pushed him. Brea Hymond never approaches Martin as she stands at a distance recording the incident. He further states Craig pulled away her arms and actively tried to resist arrest. This never happens.” According to Merrit, “In order to justify false charges he lies about several facts clearly proven false by his bodycam video.”

The police chief defended the ten day suspension as being a firm enough punishment. Unfortunately, Chief Joel Fitzgerald thinks it’s okay to have cops lie to his face and still get to serve the citizens of the community. “The perception among many here is that we allowed a child to be choked and nothing was done. That’s patently wrong. We have to get out of this idea that we are trying to hide things. We are a transparent agency. We went out to the community and talked to people,” Fitzgerald told the press. Fitzgerald attempted to push the “isolated incident” line, but outspoken members of the community disagree.

According to Rev. Michael Moore, “It would have been a totally different situation had you put your hands on my grandson. We follow the law and then the law turns against us.” Rev. Moore has been outspoken about previous abuses by the Fort Worth PD in recent years. “When we consider what happens in the poor communities in Fort Worth, policing is different,” Moore told the media. “Because had that been a white child, we wouldn’t have been here tonight. We want that perpetrator to be arrested. Put him into the system and let the system vindicate him.”

Another shocking revelation came when it was learned that despite his suspension, the Fort Worth Police Department was still prepared to promote him to Corporal. After being disciplined, Martin had the option of accepting the suspension handed down, and upon return, would be promoted to the rank. Martin chose to reject this offer and instead is fighting his suspension. According to Martin’s lawyer, “One of the things that troubled Martin and myself was that the police department’s use-of-force expert did not find any use-of-force violations. By him taking the offer, especially with him facing a grand jury, the excessive-force allegation is something that could have been used against him.” As Martin is fighting the suspension, this case is far from over. It has also been revealed that the Tarrant County Texas prosecutor is going to present the case to a grand jury, focusing on the excessive force used in the incident. The question remains how a chief of police can know all the facts, know his officer lied to him, and yet is content with sending him back to the streets. This is the very definition of corruption.

This article (New Bodycam Video Released in the Case of Ft. Worth Cop Who Roughed Up Mom and Daughter) is a free and open source. You have permission to republish this article under a Creative Commons license with attribution to the author and AnonHQ.com.