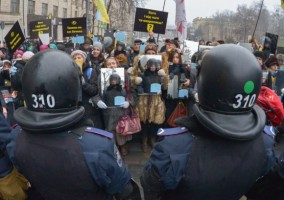 This Article Was Inspired By: http://filmingcops.com/mirrors-brought-to-protests-police-forced-to-look-at-what-theyve-become/

Something Amazing is happening in Ukraine. Here the people fear that the police have become weapons of a corrupt government, rather then members of a community, who serve and protect that community. To bring awareness to this issue the people of Ukraine have developed a new tactic in peaceful protesting. When police show up in military vehicles wearing heavy tactical gear the people of Ukraine are responding with a weapon of their own – a mirror. To form the protest the elderly, women and children and vulnerable people go to the front lines of the protest, hold firm, stand face to face with the police and simply hold up a mirror.

The purpose? Make the police take a long hard look at themselves and the behavior they are exhibiting against the citizens of their communities. The results have been phenomenal. As pictures and video has shown many police officers can be seen hang their heads and look at the ground in shame. Others officers have been seen crying. This is one the most successful and effective developments in peaceful protest we have seen in a very long time. Everyone part of Anonymous needs to take a look at the example the people of Ukraine are setting and apply this to our own localities.

This is one of the most significant adavnces in peaceful protest we have seen in a very long time. www.anonboards.com, AnonHQ.com and a number of other anon partners are joining in an attempt to bring this movement out of Ukraine and spread it worldwide in 2016. Coordinating and bringing mirrors is simple and easy. We are calling on Anonymous everywhere to plan, organize and bring mirrors to protests in the future. Show the police what they look like and how they are acting. We do not see any reason why people wouldn’t experience similar results wherever they live.

This article “A New Protest Trend For 2016” is free and open source. You have permission to republish this article using a creative commons license with attribution to the author and AnonHQ. Join the conversations at www.anonboards.com