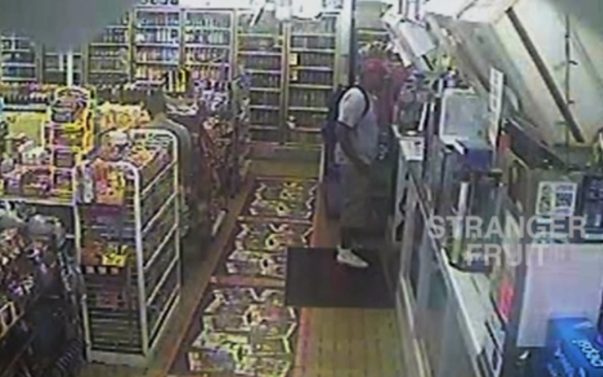 New video has surfaced showing Mike Brown engaged in a weed deal with the clerks of the convenience store he allegedly robbed. This video contradicts the official narrative that Brown was a thug who knocked off a local market before he was gunned down. Authorities in St. Louis County have been aware of the video and documented it in their reports, however, they left out key elements and chose to push a false narrative.

The footage was uncovered by documentary film maker Jason Pollock. Pollock believes this footage was intentionally scuttled by investigators as it proves beyond a shadow of a doubt that Brown did not rob the store as the police narrative claims. On the video recorded at 1:13 am the night before, you can see Brown enter the store and approach the clerks at the counter. He then tosses a small bag of what appears to be pot, which is then picked up and examined. The clerks take turns smelling it. One clerk then hands two boxes of cigarillos in a white plastic bag to Brown, who starts to walk toward the door. He stops, returns to the counter and hands the bag back to the clerk, who stores it for pick up at a later time.

The next day, Brown returns to the store and waits at the counter with his hands behind his back. On the officially released video from years ago, it shows Brown standing at the counter and it appears that he has a verbal altercation with the clerk, who in hindsight didn’t know about the arrangement Brown had with the clerks from the night before. Attorneys for the convenient store have denied there was any arrangement or trade for drugs, despite what the new video revealed. “There was no transaction. There was no understanding. No agreement. Those folks didn’t sell him cigarillos for pot. The reason he gave it back is he was walking out the door with unpaid merchandise and they wanted it back,” stated Jay Kanzler, the store’s attorney.

Brown’s mother disagreed. She was featured in Pollock’s new documentary Stranger Fruit. “There was some type of exchange, for one thing, for another,” remarked Leslie McSpadden. Pollock believes this new-found video proves the St. Louis County authorities took part in a cover up. “They destroyed Michael’s character with the tape, and they didn’t show us what actually happened. So, this shows their intention to make him look bad. And shows suppression of evidence.” Pollock spent two years in Ferguson, Missouri, researching the Mike Brown case for his documentary.

Representatives of the St. Louis County Police Department have come out and stated that the video was not released because it was not relevant to the investigation. If it were not relevant it wouldn’t have been documented in a police report and the video would not have been saved. There was an obvious connection between Brown’s visit the night before and his return for his cigarillos the following day. The video, unfortunately, doesn’t answer the most important questions that the case has left us with: primarily, what happened with Officer Darren Wilson that led him to murder an unarmed man? Pollock’s film Stranger Fruit premiered at the South by Southwest festival in Austin this past Saturday.

This article (New Video of Mike Brown Debunks Robbery Narrative) is a free and open source. You have permission to republish this article under a Creative Commons license with attribution to the author and AnonHQ.com.