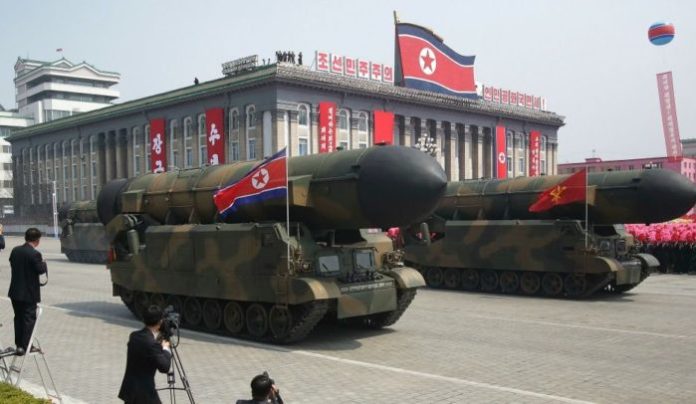 Donald Trump said the U.S. is ready to confront North Korea with a military force to stop the country from pursuing its nuclear weapons programme.

Trump stated emphatically that he has ordered the deployment of four warships, and that they are heading to the Korean Peninsula. The warships are intended to deter North Korea from carrying out future missile tests. “We are sending an armada. Very powerful. We have submarines. Very powerful, far more powerful than the aircraft carrier, that I can tell you,” Trump said on the deployment of the war machines. The armada, as Trump described it, is the USS Carl Vinson aircraft carrier (warship) and three other ships in its fleet.

However, it later emerged that the armada was not heading to Korea as Trump had claimed. It went to take part in military exercises with the Australian Navy on the Indian Ocean.

When this emerged in news outlets, White House officials put up a defense, saying Trump’s statement on the ships’ location was based on information from the Defense Department.

The Defense Department declined to comment on what caused the confusion, but said the ships are now travelling north and would arrive near the Korean Peninsula soon. Vice President Mike Pence also said the ships would arrive “within days” near Korea, but gave no other details. Both Japan and Australia are said to have also deployed warships to accompany the armada to Korea. Australia’s Foreign Minister, Julie Bishop, said the country is supporting the U.S. because Pyongyang’s weapons programme is a threat to the world. The Japanese Maritime Self Defence Force also said in a statement that it has deployed two warships, the Samidare and Ashigara to support the armada due to the increasing North Korean threat.

North Korean officials have responded strongly to this new development. First, North Korea has warned Australia of a possible nuclear strike now that it has joined the U.S. to sail to the Korean Peninsula. Take note that Japan and South Korea are the core countries North Korea would strike first in case it is attacked by the United States. Australia is the latest country to provide direct support to the U.S. alliance in the ongoing crisis.

A North Korean Foreign Ministry spokesperson told the Korean Central News Agency (KCNA) that Australia is following the U.S. moves “blindly,” and would pay a heavy price if North Korea is attacked. “If Australia persists in following the US moves to isolate and stifle the DPRK [Democratic Peoples’ Republic of Korea] and remains a shock brigade of the US master, this will be a suicidal act of coming within the range of the nuclear strike of the strategic force of the DPRK,” the unnamed official told KCNA. The distance from North Korea to Australia is about 7,320 km.

Commenting on the impending arrival of the armada, the North Korean state-owned newspaper, Rodong Sinmum said the country’s military would not hesitate a moment to sink the U.S. machines once they enter its waters.

“Our revolutionary forces are combat-ready to sink a US nuclear-powered aircraft carrier with a single strike,” Rodong Sinmun, the newspaper said in a commentary on April 23.  The paper likened the aircraft carrier to a “gross animal” and said a strike on it would be “an actual example to show our military’s force.” North Korea’s Deputy Foreign Minister also said his country would not take orders from the U.S.

To add to existing tensions, North Korea has detained a Korean-American man identified only as Kim on April 22. South Korean news reports (which we can’t trust) say Kim was in North Korea for a month to discuss relief activities. He was arrested at Pyongyang International Airport on his way out of the country. Both South Korea and the U.S. from time-to-time send undercover agents to spy in North Korea. The arrest of Kim takes the total number of Americans detained in North Korea to three. Meanwhile, China has called for calm amid the rising tensions.  Speaking during a visit to Greece, Chinese Foreign Minister Wang Yi said there were already enough shows of force and strong words between North Korea and the United States. Mr Wang said China doesn’t want to see a nuclear or any military buildup in the Korean Peninsula.

He was quoted as saying: “We need to issue peaceful and rational sounds. China is firmly supporting the denuclearization of the area in the name of stability and peace.”

This article (North Korea to Sink Trump’s Armada, Threatens Australia with Nuclear Strike) is a free and open source. You have permission to republish this article under a Creative Commons license with attribution to the author and AnonHQ.com.