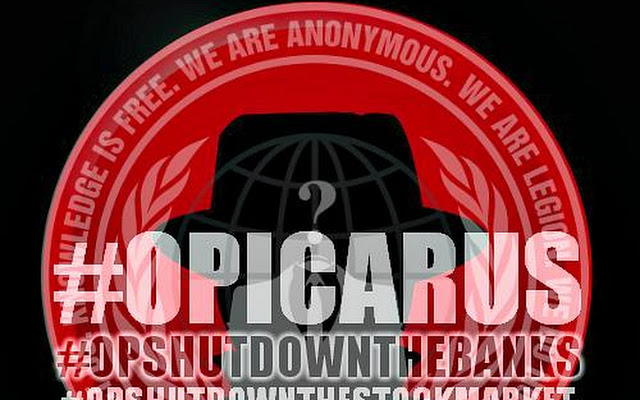 OpIcarus strikes again, but this time they have taken down 4 more banking websites.

If you have been reading my previous articles about OpIcarus, then you would know that OpIcarus and Ghost Squad Hackers have formed a legion together, in order to complete the 30 day bank take-down challenge.

The anonymous group “OpIcarus,” as well as their newly joined team “Ghost Squad Hackers” are still cyber attacking the financial institutions all around the globe, and here is an update on their status.

After taking a small break from their online activity, Anonymous @BannedOffline and the Ghost Squad Hackers are back in full hacking action.  All the attacks are under the known banner “Operation OpIcarus”.

This online anonymity group of hackers has conducted the world’s largest series of “Distributed Denial of Service” (DDoS) attacks, and they are not even close to being completed. These new DDoS attacks have targeted the bank websites of Central Bank of Jordan, Central Bank of South Korea, and the Bank of Compagnie, Monegasque, forcing them to remain offline for around an hour and a half.

Anonymous stated during their attacks that “OpIcarus will continue.”

Continuing a conversation with HackRead, one of the attackers stated:

“Montenegro is at the heart of elite political corruption. Most of the ISIS/ISIL terrorist group looted money flows through Jordanian banks and South Korea is pretty much a US army base in the Asia-Pacific. Sites are staying offline for much longer periods now as more people are joining in the Operation. All targets so far have been central banks and no innocent people were harmed. We aim to keep it that way. OpIcarus will continue.”

Here is a Tweet that HackRead was tagged in;

Operation OpIcarus had originally launched back in March of 2016, with the operations popularity gaining quick momentum in a short timeframe. After the relaunch of OpIcarus, Anonymous, as well as Ghost Squad Hackers commenced several massive DDoS attacks that have targeted large banking and financial institutions world-wide. The first bank that had experienced this shut down was the Bank of Greece, then followed by the Central Bank of Cyprus and the Dutch Central Bank. Other banks such as the Central Bank of Guernsey and the Maldives Monetary Authority (known as the Central Bank and Banking Regulator), the Central Bank of Bosnia and Herzegovina have also suffered similar disruptions. During the last couple of months we have witnessed a slight of cyber attacking bank websites, and it had all started with HSBC Bank on the day of salary. Shortly after that, the Turkish banks had also faced the imposition of cyber-attacks that disrupted credit card transactions across the country.

We would like to hear your input about #OpIcarus, how do you feel about their reign of power against the financial institutions?

This article (#OpIcarus: Takes down 4 more Banks!) is a free and open source. You have permission to republish this article under a Creative Commons license with attribution to the author and AnonHQ