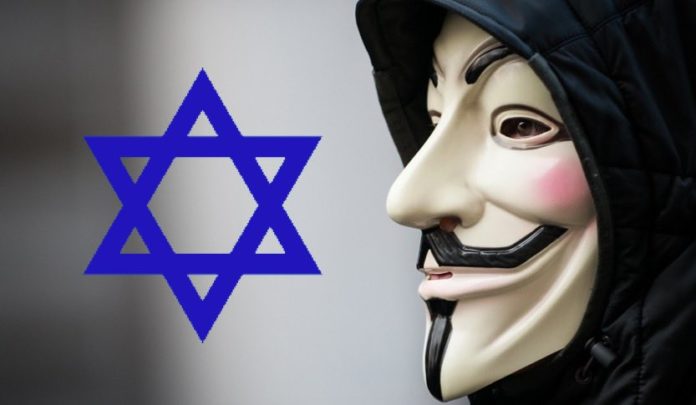 Under OpIsrael, various groups within the Anonymous collective have waged cyberwar against Israel and U.S. government entities. The attacks are in retaliation of Trump’s recognition of Jerusalem as Israel’s capital, as well as the occupation of Palestine and abuses committed against the Palestinian people.

#OpIsrael, which began in 2013, is an annual operation that takes place in April. However in light of the continued abuses that are condoned and enabled by the U.S. government, various initiatives have been, and will continue to be ongoing.

The United States government’s support for Zionism began in 1922 with the Lodge-Fish resolution, (Raymond, 1992, p. 287). The resolution was a word-for-word copy of the British Balfour Declaration, which called for “the establishment in Palestine of a national home for the Jewish people,” (Rubenberg, 1986, p. 27).

In November of 1917, the Balfour Declaration was delivered to Lord Walter Rothschild (of the notorious “Rothschilds”), a leader in the British Jewish community. Contained within a letter from the United Kingdom’s Foreign Secretary, Arthur Balfour, the declaration was presented by Lord Rothschild to the Zionist Federation of Great Britain and Ireland, making the U.K.’s support for a Jewish state official.

Although the U.S. began its support of Zionism in 1922, it was in 1948, after the atrocities of WWII, that the U.S. government officially recognized Israel as a state. The U.S. had previously refrained from recognizing Israel’s legitimacy in order to support peace. Israelis made up a small portion of the population in the Middle East. The majority-Arab population was opposed to the creation of the State of Israel.

The decision therefore, came as unexpected to many. According to documents at the Harry S. Truman Presidential Library & Museum, a State Department official had to be sent to the United Nations to prevent the entire United States delegation from resigning.

The massacre of the Jewish people during World War II will forever be a dark stain on mankind’s history. As victims of extreme nationalism, it is therefore ironic that the Jewish citizens of Israel are now following the same path as those who persecuted them.

Since its establishment, the Israeli government has conducted various attacks on its neighbors in an effort to expand its territory. The U.S. government has in turn been forced to referee the altercations, most often coddling Israel in the process. Read our brief history of the U.S.’s involvement in the Middle East here: source.

Citizens of Israel have been taught that to protect the state, the population must be strictly controlled. This can only be done through racism.

Last December we reported on Sahar Vardi, an Israeli activist who stated that in Israel, it’s considered “okay to be racist.”

Within the Balfour Declaration that was delivered to Lord Rothschild in 1917, it was specified “that nothing shall be done which may prejudice the civil and religious rights of existing non-Jewish communities in Palestine.” Yet according to journalist and author, Max Blumenthal, the conflict has taken on a religious dimension. This assault on the religious rights of the Palestinians has in turn led to civil and human rights abuses.

It was the attack on Gaza in 2013 that once again brought the abuses being committed by Israel to the world’s attention. As well as targeting Hamas bunkers, Israeli ground forces and strike aircraft hit civilian homes, schools, and hospitals. A quarter of the resulting Palestinian deaths were children.

Children of all ages continue to be popular targets for Israeli soldiers, as they commonly throw rocks at their occupiers. Children barely older than toddlers have been arrested, others have been beaten, and even worse, there are some who have been shot and killed.

This brings us to the case of Ahed Tamimi, a teenage Palestinian activist who was recently sentenced to 8-months in prison on 12 charges that include assaulting security forces, and throwing stones. Ahed slapped two soldiers who refused to leave her family’s home in the West Bank village of Nabi Saleh. She had just learned Israeli troops shot her 15-year-old cousin in the head with a rubber bullet for throwing stones. He was severely wounded. #FreeAhedTamimi

Israel forces have long targeted protesters as well, though reports barely make U.S. corporate news. Within recent weeks, the death toll of Palestinian protesters killed has reached more than 30, according to Reuters.

While Israeli citizens are taught to dehumanize Palestinians, the Palestinians are not the only victims of Israel’s nationalism. African migrants who have fled to Israel to escape various forms of persecution, now face persecution from the Israelis themselves.

Additionally, reports have circulated that migrant women are being forced to take ongoing birth control injections. This includes Ethiopian Jews who believed Israel would be a sanctuary:

To this day, Israelis continue to claim they are victims. But this claim is hollow in light of the vast amounts of footage showing abuses committed by Israeli soldiers. As well as the racism of the Israeli people. All of this has been condoned and financed by the U.S. government.

The only hope of changing Israel’s policies and stopping the abuse, is to apply pressure from outside. You can take part by joining initiatives such as the Boycott, Divestment, Sanctions (BDS) movement. The BDS movement “works to end international support for Israel’s oppression of Palestinians and pressure Israel to comply with international law.”

The BDS movement’s website (link directly above) provides a list of products and brands that are profiting from Israel’s crimes. Consumers are encouraged to boycott the following:

Any fruits and vegetables from Israel. They’re one of Israel’s largest exports, and exporters who operate on stolen Palestinian land are complicit in Israel’s violations of international law;

‘Caterpillar,’ whose bulldozers are used regularly to bulldoze Palestinian homes;

And ‘Sabra’ hummus, which is “a joint venture between PepsiCo and the Strauss Group, an Israeli food company that provides financial support to the Israel Defense Forces.”

For future updates on #OpIsrael, you can follow @Giantsps, @ExitFDP, and @YourAnonRiot on Twitter. There are of course many other Anonymous groups participating. You can additionally follow the hashtags #OpIsrael, #OpPalestine, and #OpFreePalestine for updates on their initiatives.