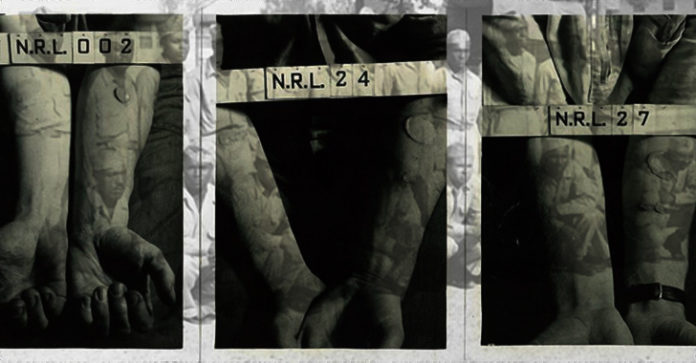 The U.S. Army has finally admitted to conducting experiments on human subjects with chemical weapons throughout World War II—simply because they were African-American, Japanese-American, or Puerto Rican. With America’s dysfunctional inability to discuss the country’s underlying systemic racism once again diverted thanks to a flag, a troubling investigation by NPR proves such conversation is nothing less than an imperative.

Roughly one million black men serving in World War II faced the shameful double-standard of fighting for the very country that viewed them with suspicion and hate. Troops of color were ruthlessly discriminated against by their superiors and forced to clean and cook for white soldiers, among other demeaning tasks. Segregation was the rule from the barracks to the battlefield.

60,000 of those enlisted minority men were singled out to cruelly and unwittingly serve as the army’s human test subjects to determine how mustard gas would react with contact to skin. Though white subjects were also used, they served as the control group to “establish what was ‘normal’” in comparison to the skin of minorities.

Federal officials initially admitted to human testing in 1991, but it wasn’t until NPR thoroughly delved into available documentation and conducted interviews with survivors that the true nature of these experiments became apparent.

Director of Pentagon press operations, Army Col. Steve Warren, acquiesced that the race-based tests had occurred but quickly emphasized how different the military was during the second World War. “The first thing to be very clear about is that the Department of Defense does not conduct chemical weapons testing any longer. And I think we have come as far as any American institution on race. So I think particularly for us in uniform, to hear and see something like this, it’s stark. It’s even a little bit jarring,” he told NPR.

Documents revealed shortly after the initial revelation of the army’s experiments described three methods for testing:

“Patch tests where liquid mustard gas was applied directly onto test subjects’ skin; field tests, where subjects were exposed to gas outdoors in simulated combat settings; and chamber tests, where men were locked inside gas chambers while mustard gas was piped inside.”

At least one researcher interviewed by NPR felt the army could have been hoping to discover the “ideal chemical soldier”—an entire racial group able to act as a buffer on the front lines, absorbing the majority of a chemical attack while white troops waited for the effects to dissipate. Though the army conceded the race-based nature of the experiments, the true reasons for testing remain undisclosed after a lengthy battle for requested records failed to produce any results.

Rollins Edwards survived his ordeal as an army test subject. The 93-year-old carried something with him for years to prove as much to anyone who doubted him—a jar to hold the flakes of skin that continue to scale off from the after-effects of the chemical some 70 years later.

His experience—and his jar of skin—are analogous to America’s larger neurosis. Blatant racism as policy and practice might be chaptered in history, but the surreptitious after-effects as a systemic issue are every bit as real today. It’s somewhat ironic that those so acutely aware of the problem don’t always have proof for the doubters as tangible as a jar full of evidence.

This article (Pentagon Admits to Race-Based Human Experiments During WWII) is free and open source. You have permission to republish this article under a Creative Commons license with attribution to the author andtheAntiMedia.org. Tune in! Anti-Media Radio airs Monday through Friday @ 11pm Eastern/8pm Pacific. Help us fix our typos:[email protected].