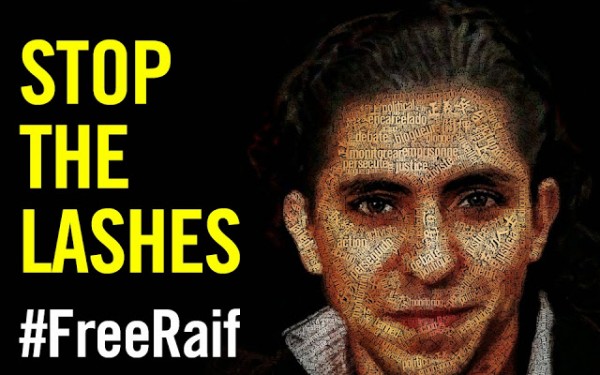 The Pontiac Tribune first reported that anonymous activist and the Norwegian Pirate Party member, Raymond Johansen planned to subject himself on August, 16 2015 to 50 of the same 1,000 torturous lashes that blogger, Raif Badawi was sentenced to suffer as punishment for apostasy in Saudi Arabia.

And the Cryptosphere and Tweets posted online showed that the activist has indeed received the 50 lashes at London’s Trafalgar Square to raise awareness of the case of the imprisoned blogger in the conservative Islamic Kingdom.

Saudi Arabia’s high court ultimately imposed Badawi’s outrageously disproportionate punishment of 10 years in prison and 1,000 total lashes after he was arrested in 2012 on charges of insulting Islam and committing apostasy through electronic channels. Badawi’s lashes were supposed to be carried out in weekly sets of 50. But after enduring just the first set on January 9, 2015, his body was so horribly battered that even though months have passed in the interim, a doctor has still not deemed him fit to receive the second. Activists have said he is likely to die if he receives another 50 set.

Badawi founded the Saudi Liberals blog to fight for free expression in a country where such rights are seen as defiance to the elites who then use false religious teaching to firmly grip their hands on political, social and economic power.

Raymond’s flogging was said to be the first public flogging in Trafalgar Square since the 1830’s. The practice of flogging for punishment was banned for cruelty in the UK in 1948 for adults, but not banned for children at school until 1987. He was beaten with a cane, the same weapon used by the Saudi police and prison officials on Badawi. The flogging had to be stopped twice as the canes being used on him got broken. The flogging were said to have been administered in several batches. The event was also broken up by police but that notwithstanding, he successfully received the harsh solidarity punishment. Raymond is said to have been a victim of torture in the past.

The UK’s Anonymous Radio host, Steve Stevenson said “He was in pain when he moved. 50 or more lashes, two canes broke. I left him with campaign organizer, drinking a whisky.”

Free Raif Badawi organizer, Nathan Newman also said, “He’s a bold, strong man. I’m glad to have met him and to be working with him”.

You can watch a video of an authentic Saudi flogging below for comparison purposes. Caning has drawn much condemnation in recent years as torture, although countries that rely on it as judicial punishment resist such a label.

Another Anonymous UK Radio host, Tony Cleghahan commented on Facebook, “Gezz man hope he is ok.. last night was not easy for him. Send him my deepest love and hugs.”

“Many thanks and much respect to dearest Raymond for his courageous and heroic act last night. Although I’m deeply saddened that he had to suffer in order to make a statement, but I’m filled more motive to do more for what I believe in and what I fight for. Thanks Nathan for being there for Raymond you guys are awesome. I saw you were badly hurt; please take rest until you fully recover.”

“Please know that you can reach out to me if needed. I can only imagine what you’re going through right now, and as such, will continue to stand in your corner.”

“Raymond, I heard you say in your interview that you needed to curl up in a corner where you felt safe. We are all in your corner, keeping you safe. Let us know if there is anything specific that we can do”, host of other activists also wrote online.

This Article (Anonymous Activist, Raymond Johansen Receives 50 Lashes In Solidarity With Raif Badawi [Video]) is free and open source. You have permission to republish this article under a Creative Commons license with attribution to the author and AnonHQ.com.