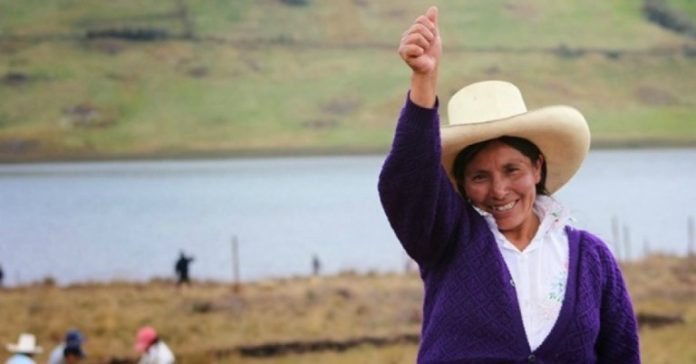 Acuña’s inspiring story is proof that activists’ efforts do matter, and that even the world’s largest companies will be held to account.

Peruvian activists knew they were entering a David-vs-Goliath battle when they decided to shut down the creation of a $5 billion open-caste gold and copper mine next to a pristine lake, but they have so far succeeded.

However, much of the community’s success in this endeavor can be credited to Maxima Acuña, a farmer who owns a 60-acre plot of land on the exact site where the giant Newmont Mining Corporation desires to dig.

Earlier this year, the mother of four received one of six prestigious Goldman Environment prizes for pioneering the fight against corrupt mining corporations, and her story is definitely worth sharing.

According to The Guardian, the Peruvian government has been issuing mining licenses across the country with promises of jobs and economic prosperity. As a result, many companies have been taking on mining projects, but with little regard for rural peasant farmers. In fact, because the farmers are rarely consulted in the development of the projects, many waterways have become toxic, which affects the local people’s drinking water and irrigation needs.

The travesty has been ongoing but has received little coverage by mainstream media.

Regardless, individuals like Acuña know that the Earth needs to be protected for present-day families and future generations to thrive. On her own 60 acres of land, she and her family live a peaceful life raising their children. She is responsible for growing potatoes and other crops when they are in season, and keeps sheep and cows for milk and cheese. Occasionally, she makes the long trek into town to sell vegetables, dairy, and woolen handicrafts.

While Acuña never learned to read or write, she understands that land is one’s lifeblood, and the the polluting effects of mining corporations are not to be tolerated.

Her property, however, has been highly sought after by Newmont Mining Corporation, which seeks to drain four lakes near her property and even turn one into a storage pit. The act would threaten the headwaters of five watersheds and an entire ecosystem of high-altitude biologically diverse wetland.

Obviously, Acuña is not interested in selling her land – not only because mining is devastating to the environment, but also because the area is her home.

Her refusal prompted the powerful corporation to take insidious action against the Peruvian native by suing her. To combat the threats (which included having her home destroyed by the corporation’s officials), she sought legal help from GRUFIDES, an environmental NGO in Catamarca that represents local community members in cases against mining companies. She also hired attorney Mirtha Vásquez, who helped her appeal the ruling and begin gathering documents such as her land title that proved she held legitimate property rights to the land desired by the corporation.

In December 2014, the court ruled in Acuña’s favor. Goldman Prize relays that a previous prison sentence was overturned and the court halted her eviction. As a result of the legal victory, the Conga mine has been kept out of the Tragadero Grande.

And, Newmont has not been able to move forward with any mining in the area around Laguna Azul.

It’s not every day an individual – supported by her community and educated professionals – is able to beat a giant, which is why her story is so newsworthy.

Acuña is now more inspired than ever to continue fighting for justice – despite being exhausted from the trauma. Her plight has helped encourage thousands of other Latin American farmers who are struggling to stand up against multinational mining companies. And, her success is proof that corporations can be beaten, especially when communities rally and activists refuse to back down.

As people continue to defend their water supplies, land, and Peru’s pristine environment, they look to Acuña for inspiration.

This article (Peruvian Farmer Wins Monumental Battle Against U.S. Mining Giant) is free and open source. You have permission to republish this article under a Creative Commons license with attribution to the author and TrueActivist.com