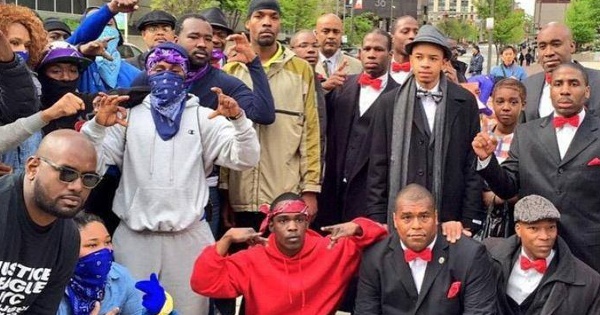 After the police woefully failed to protect lives and properties in the Baltimore protests, they quickly turned around to blame a group of young men who have organized themselves into gangs to save the situation.

In the ensuing chaos in which protesters are angry about the brutal killing of Freddie Gray, the gang members called for a truce to protect their communities. Police initially panicked when hearing about the truce and put out a warning out that gang members were teaming up to attack police in the city. But again, it was quickly revealed that these claims were entirely fabricated and that the gang members did not have ill intentions in calling their truce.

Baltimore’s City Council President, Bernard Young, commended these young men saying, “These men have been out on the street quelling the senseless violence that has consumed our city. After meeting with them today it is clear that the notion they were planning on harming our police officers is false and simply deterred the resources we needed to focus on the individuals who instigated these riots. I applaud these young men for standing here and speaking out for our city.”

The men have grouped themselves into Crips, Bloods and BGF and are said to be Baltimore’s three largest gangs. They even stood with city council members during a press conference and the council members highly commended them for their good work.

Some of the tasks they got involved were directing traffic, saving journalists from attacks and protecting properties from being looted. In fact, some journalists have confirmed that they were saved by gang members when they became trapped in the center of the chaos.

A Baltimore Sun journalist, Justin Fenton, denied an initial report that he was saved by a shop owner when he became trapped during the peak of the protest. He said the shop owner just stood there to protect his business and it was gang members who rescued him from being harmed. The hero who saved Fenton was later identified as Charles Shelley, a gang member currently involved in the truce.

When tales of Shelley’s actions went public, another journalist, Ben Jacobs of the Guardian, Tweeted that, “He looked out for me too!”  It is really refreshing to be hearing testimonies like these from neutral observers about the gang members whose reputations the police want to tarnish for no apparent reason.

“What we’re seeing today is not about Freddie Gray. It is about the pain, the hurt and the suffering of these young people. There’s no excuse for them to loot, riot and destroy our city. I made a comment out of frustration and anger when I called our children ‘thugs.’ They’re not thugs. They’re just misdirected. We need to direct them on a different path by creating opportunities for them,” Young said, apologizing for his earlier comment in which he called protesters thugs.

“You need to make sure all these people know that this is also not a racial issue. This is about people in poverty and people that are oppressed, regardless of what color you are. We have white Bloods, we have white Crips. It‘s not about Color. It’s not about race,” one gang member told The Real News.

“We don’t need the police to protect our neighborhood because we protect our own, and it’s that simple,” another said.

Now that it has become public knowledge that gang members are even doing a far better job than the police, we hope that the police will just shut up and stop the unnecessary false allegations and concentrate on how to clean their hands of innocent bloods. We congratulate these young men.