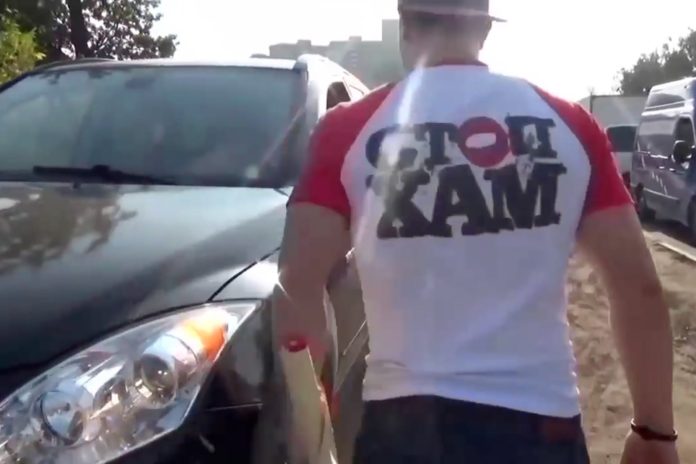 When law enforcement officials don’t do much to stop the lunatic drivers from encroaching the pedestrians’ space, a group of citizens start a campaign to shame the rude drivers and curb the menace.

Founded in May 2010 by Dmitry Chugunov, Stop a Douchebag, a youth movement in Russia is attempting to reclaim the sidewalk for pedestrians forced to take a step sideways to avoid getting hurt, and enforce the road traffic regulations in a country where obnoxious drivers use the sidewalk as a road to avoid traffic jams.

“Part of the goal of this project is to show that there are different drivers: There are those who don’t give a fuck about anybody, who believe that other people’s time, emotions, and lives don’t have any value. People who think that their business is more important than everybody else’s. Our goal is to show these people and ridicule them in our videos. In doing that, we’re forming negative associations with the younger generation in relation to that sort of behavior, and we’re trying to establish an appropriate pattern of behavior for future and current drivers,” Dmitry tells VICE.

On sidewalks and footpaths, the brave young protagonists stand in the way of bad drivers, politely ask them to head back to the road and if they refuse, plaster a hard-to-peel-off sticker (which proclaims in Russian: I Spit on Everybody, I Drive/Park However I Want) on the windshield, right in front of the driver’s seat.

Sometimes the argument gets cruel; at this time the volunteers find themselves on top of car hoods due to boy-car collision. Some drivers push them along for feet, meters, sometimes even blocks, if their words, or stickers, don’t dissuade them from moving ahead.

The movement is non-violent. However, sometimes aggressive drivers hit the members so hard that they get bruises and fractures. In such cases the videos are taken to the police who take action like tracking the driver and temporally suspending his driving license.

And how do people support StopXam’s (Stop a Douchebag in Russian) cause? “Some people send us money, but most people simply support us by spreading the good word—that’s enough for us. The thing is, we have two channels on YouTube, one is temporarily blocked right now because of a few legal issues, but on that one we’ve got over 2 million subscribers, on the other one we’ve got about 250,000. So, that’s a large enough audience that through its size alone is able to support the project,” Dmitry added.