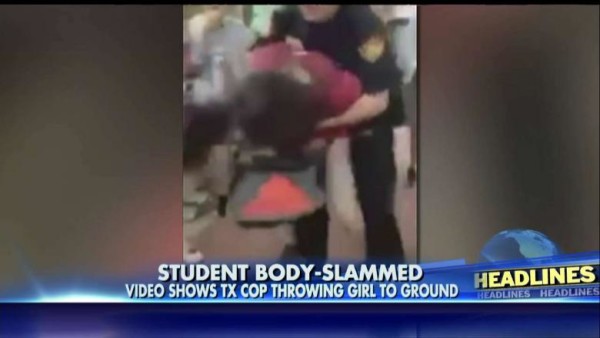 An amateur video posted online showing a police officer body-slamming a student on a concrete cement floor, has gone viral on many social media platforms.

The incident is said to have happened in the city of San Antonio, Texas, United States. The officer is seen in the video lifting up the middle-school student into the air, and slamming her hard on the ground.

As the student seems to be motionless on the floor, the officer handcuffs her. Some students are heard shouting at the extreme force used by the officer. Others too laugh. The officer then escorts the defenseless girl away.

The Free Though Project has identified the officer as Joshua Kehm. According to ghost-0 com, the girl who suffered the abuse picked up a quarrel with another student. In Officer Kehm’s attempt to stop the quarrel between the two, he ended up committing that abuse against the girl. Officer Kehm was serving as a supervisor in the school. According to Kehm’s LinkedIn Profile, he has been with the San Antonio Independent School District since February of 2015. The incident was captured with a cell phone by an unidentified student. Immediately, when the video was posted online it went viral, prompting police and school officials to issue a statement that they will investigate the incident.

San Antonio Independent School District spokeswoman, Leslie Price told WOAI/KABB media “It’s very concerning. It’s alarming to see this. And while we want to get all the details, I want people to know that excessive force will not be tolerated in this district.”

Local media later indentified one Gloria Valdez as the mother of the girl. Gloria said what she needs now are answers from the officer as to why he slammed the little girl, without even considering her age. Gloria also said her daughter is now suffering from severe headache as a result of the officer’s action.

She was quoted as saying “You could just hear where she hits the ground. And it’s nothing but concrete, cement. She wasn’t moving. She was just knocked out. I wanted answers, and nobody could give me answers.”

The school district also said the officer had been placed on administrative leave, pending the outcome of investigation of the incident.

This is not the first time a police supervisor in U.S. public schools is seen using excessive force against a student. In 2015, a police officer working at a South Carolina school was dismissed after video circulated on social media showed him violently removing a student from her desk.

That video sparked widespread outrage against police officers serving as supervisors in public schools across the United States. Some observers even suggested that police should be removed from schools, as they do not perform any important function. Just last month, three officers at the Baltimore school system were placed on administrative leave after a similar cell phone video like this current one, showed one of the officers slapping and kicking a young man. The three officers have since been charged with assault.

Statistics from the National Center for Education indicate that about 43% of all public schools in the United States, including 63% of middle and 64% of high schools, had school resource officers on their grounds during the 2013-2014 school year.

This article (Police Officer in San Antonio Caught on Video Body-Slamming a Little Student [Video]) is a free and open source. You have permission to republish this article under a Creative Commons license with attribution to the author and AnonHQ.com.