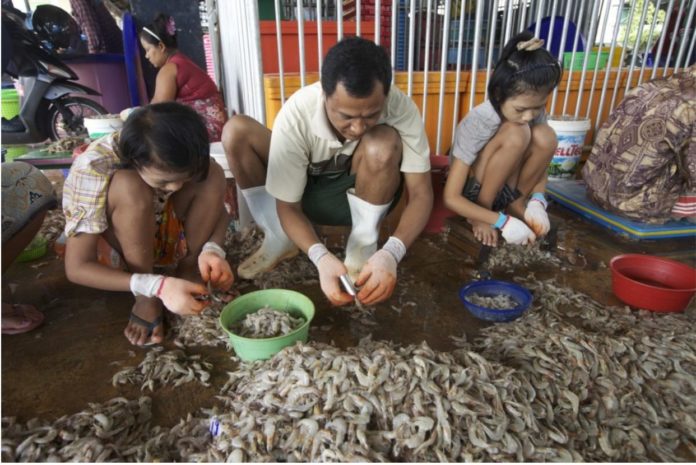 Dining out is usually a treat for most people able to afford it, but if you knew your meal was created using slave labor, would that leave a bad taste in your mouth?

Thailand’s $7 billion seafood export trade depends heavily upon human trafficking, despite the governing military junta repeatedly promising to crack down on those responsible. Shrimp “workers” are addressed by numbers, not names, forced to work 16-hour days peeling and deveining shrimp soaked in ice water. Many of these “workers” are Cambodian or Burmese migrants caught whilst fleeing desperate circumstances in their homeland.

Many of these slaves are children. “After being sold to the Gig Peeling Factory, they were at the mercy of their Thai bosses, trapped with nearly 100 other Burmese migrants. Children worked alongside them, including a girl so tiny she had to stand on a stool to reach the peeling table. Some had been there for months, even years, getting little or no pay. Always, someone was watching,” reads the AP report.

Not only are shrimp processed and shipped by slaves in Thailand, often the fishermen who catch them are slaves as well. According to The Guardian, Thailand is home to approximately half a million slaves, despite slavery being illegal worldwide.

“I thought I was going to die,” a former Cambodian monk named Vuthy, who was sold from captain to captain, said in the Guardian piece. “They kept me chained up, they didn’t care about me or give me any food…They sold us like animals, but we are not animals – we are human beings.”

As a result of the AP investigations into slavery in the Thai seafood industry, over 2,000 fisherman have been freed from slavery, new laws have been proposed, and dozens of arrests made. One can hope continued international pressure will lead to a decrease in slavery in this and other industries.

This article (Popular Chains Use Slave Labor Shrimp) is a free and open source. You have permission to republish this article under a Creative Commons license with attribution to the author and AnonHQ.com.