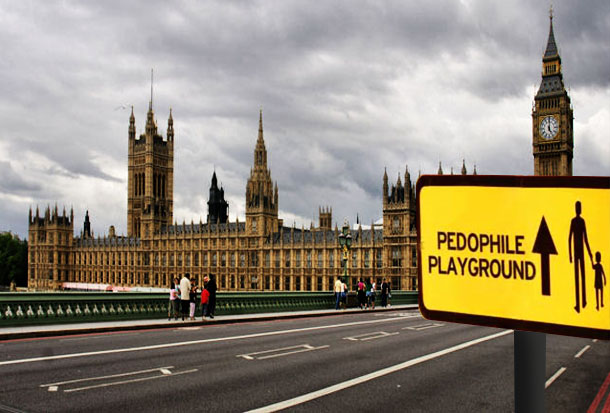 The running theme in the 1980s and 1990s when contemplating the investigations of the pedophile rings in the UK: Westminster and Whitehall; or in the Netherlands, is to “protect the system.” After all, according to Thatcher’s former cabinet minister, Lord Tebbit, who believes a political cover-up “may have” occurred in the 1980s; the establishment’s “collective instinct” was to guard the situation closely.[i]

It is said that at least forty British MP’s are involved with the Westminster pedophile ring cover-up, with Home Secretary, Teresa May paving the way for further investigations, and announcing recently, a review into the 1980s cases of reported child abuse allegations. [ii] Some notable names are involved, including BBC presenter, Jimmy Savile, and former British MP, Cyril Smith, (both now deceased).

Centering the investigation, is the ghastly manifestations that occurred behind the closed doors of Elm Guest House, the alleged suburban London house where the pedophile ring operated in the 1980s. Metropolitan Police initiated Operation Fernbridge with the assistance of childcare professionals, who claim that the inquiry was obstructed by the “establishment.” [iii] [iv] Other names who frequented the Elm Guest House during this time were: Colin Peters, a Foreign Office barrister, who was jailed in 1989; Anthony Milsom, a convicted pedophile who later had a reduction in his sentence; and Warwick Spinks.

Spinks had supposedly arranged the sale of a boy to a brothel in Amsterdam. Since then, he was arrested in 2012 after more than 15 years on the run from officials, after being located in Prague, Czech Republic. According to a 2012 article in The Mirror, Spinks was “identified as a dangerous child abuser with links to pedophile rings in the UK and Europe.”[v]

Evil Warwick Spinks, 48, who has a horrific history of kidnapping , abusing and selling young boys, was flown back to the UK after being arrested in Prague in the Czech Republic.

This isn’t the first time an elite pedophile ring has been covered up with the assistance of government officials.Considering this, with the current investigation of the missing dossiers containing the names of high ranking politicians and the Westminster pedophile ring, the same raised eyebrows could equally question the circumstances surrounding the silenced Rolodex investigation of Joris Demmink in 1998 in the Netherlands. Despite Demmink having somewhat forty accusations against him from this time, he was elected to the Dutch Secretary-General of the Ministry of Security and Justice from 2002 until he retired in 2012.[vi] During the Rolodex Investigation, Dutch prosecutors were working hard on bringing a gang of child abusers to trial. This investigation scrutinized some of the supposed main players of the ring, and police were ready to arrest and search homes when the operation came to a sudden halt.[vii] The names included Demmink, along with Frits Salomonson, court judge in Amsterdam and judicial advisor to Queen Beatrix; Prince Claus, husband of Queen Beatrix (whose father established the Bilderbergs); Dutch Secretary-General of the Ministry of Security and Justice

Job de Ruiter and Ger van Roon, both high standing professors at the Free Univeristy of Amsterdam; and District Attorney, Henry Hans Holthuis. [viii] It is suggested that Demmink, in his position, tipped off the suspects by leaking information from the prosecution. The Rolodex investgation ended before it ever had a chance to start. Currently, the investigations have reopened. According to The Express in January this year, “The news comes as Dutch police prepare to re-open an investigation into child sex, which may ­be broadened to include British pedophiles operating in the Netherlands…Last week, Dutch prosecutors ­confirmed they are to investigate the Netherlands former justice ministry secretary-general Joris Demmink for allegedly raping two Turkish boys.[ix] It doesn’t stop there, with the Netherlands own Savile possiblity – entertainer Paul de Leeuwlinked to Demmink, by a witness, interviewed by journalist, Micha Kat.[x]

The question now remains, with evidence resurfacing for investigations, after years of neglect and burial by the elite groups who are involved, with new members willing to stand against them…will justice finally carry the day?

Don’t forget the catch phrase for the Ministry of Justice that Demmink ran in the Netherlands: “To build a just and safe society.”[xi]

I’ll let you be the judge and jury of this one.

[iv] Andrew Winning (12 July 2014) “Too many of them: Warnings on pedophiles operating in Westminster were ignored.” Reuters. Retrieved 16th July, 2014. http://rt.com/uk/172348-pedophiles-westminster-warnings-ignored/