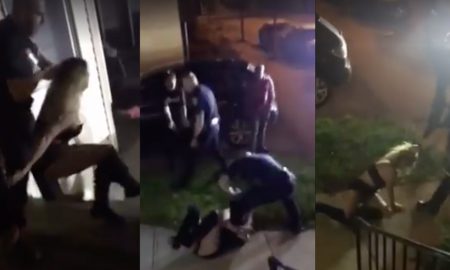 Providence Rhode Island Police were captured on cell phone video slamming a woman’s head into the side of her house, repeatedly punching her in the face and dragging her by the hair. The officers are unable to retain a professional demeanor when challenged by the woman, and seemingly turn a simple situation into a violent one sided exchange. The victim of police this time was Carolinmar Torres. Police were allegedly called to the house as occupants were breaking things inside. Police have not elaborated on the initial call which sparked this vicious assault by their officer.

The cop was identified as Ofc. Michael Place. Place initially approached Torres and yells at her “Get the fuck up!” She swats back at him when he grabs her by the arm and forcefully throws her like a rag doll, bashing her head against the side of the house. Place holds Torres by the hair and swings her down the porch steps onto the pavement. A man walks up attempting to plea with officers to stop he but gets thrown to the ground. Place punches Torres in the face three times before dragging her by her hair. The video continues as the officer comes back to house screaming “Who’s got my flashlight? If I find one of you with my light, I’m locking you up.”

This problem in this case is fundamentally the same as an Alton Sterling or Philandro Castile or a Michael Brown, not in respect to race, but in respect to the extreme hypervigilance demonstrated by the officers. Race is by far the biggest factor when it comes to police killings. Racial discrimination alone does not kill people. The other half of the equation is the constant state of hypervigilance that law enforcement persist in, mostly unnecessarily. Cops wind them selves up and then explode under circumstances that a reasonable and clear minded person would not. The self inflicted stress of hypervigilance due to perceived threats clouds the judgment of police. This becomes obvious when videos like that of Ofc. Place having a temper tantrum surface. The video clearly shows a scared woman freaking out because the cop, who is supposed to be the professional on scene, can’t keep it together.

Despite the police call for gathering all the facts before judgments can be made on the officer’s actions, a lot of information can be gleamed from this video itself. It is unknown if any violence may have occurred prior to the start of the video, the scene was mostly calm with a scared Torres backing away from a hostile officer. It is the police’s job to de-escalate situations not antagonize them. Time and time again, these cell phone videos show police going above and beyond their lawful use of force taking out personal anger and frustration on their victims. Police can use force for only two reasons; defense and control. Ofc. Place should have been attempting to handcuff Torres but instead he proceeded to manhandle and beat her. This was not justice, this was the result of a cop who cannot handle the challenges police are expected to face on a daily basis.

Torres was charged with felony battery on a police officer for doing what will amount to an excellent self defense case. Torres actions on the video appear to be in response to the overly hostile behavior directed at her from Ofc. Place. The Mayor Jorge Elorza has stepped into the conversation demanding an investigation. “After seeing the video, I believe this matter warrants immediate review. I have directed my public safety commissioner and chief of police to fully investigate this incident” Elorza commented in a statement to the press. The status of the internal investigation is unknown.

VIDEO: Cop Loses it On Exotic Dancer, Drags Her Down Stairs by Her Hair, Smashes in Her Face