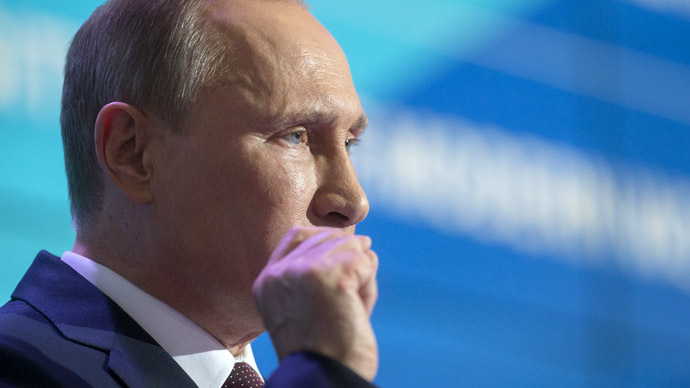 Putin has delivered a scathing speech, accusing western nations of “promot[ing] the propaganda of pedophilia” through eroding Christian objectives and moral ones too. The Russian President talks about moral decay in a system and normalizing behaviors that he sees as leading to “degradation and primitivization (of culture).” “Without the moral values that are rooted in Christianity and other world religions, without rules and moral values which have formed and been developed over millennia, people will inevitably lose their human dignity,” Putin says.

“Christian Holidays and celebrations are abolished or ‘neutrally’ renamed, as if one were ashamed of those Christian holidays. With this method one hides away the deeper moral value of these celebrations.”

But it is the traditional notion of identity that concerns Putin. Traditional identity is being “denied or relativized” while new ideals are put forward. He questions the cost and accuses the West of placing Satan as an equal to God, and normalizing pedophilia through political correctness.

“The excesses and exaggerations of Political Correctness in these countries indeed leads to serious consideration for the legitimization of parties that promote the propaganda of pedophilia,” he said in the speech. “One has to respect the right of every minority to self-determination, but at the same time there cannot and must not be any doubt about the rights of the majority.”

The speech places the spotlight again on sex trafficking and pedophile rings. Only this month, western mainstream media ‘forgot’ to report on two very large international child trafficking rings busted. Government officials from India and Niger were involved, and possibly western elites, but the Mainstream Media chose to remain silent, begging the question why.  This is one example of many where the West attempts to normalize or ignore pedophilia behaviors.

Only this year, a controversial bill was signed by Putin banning US citizens from adopting Russian children. Some critics say it was Putin’s way of fighting back at a new American law aimed at human rights abuses in Russia. But Putin maintains its aim was directed at the “out of control” pedophilia in the United States, particularly in Washington D.C.

Like most leaders, Putin is far from perfect. But technically he’s correct.  How many times do you hear someone jump to the defense of a pedophile, claiming they’re just ‘sick in the head?’ This is a form of normalizing a behavior that a person has chosen to do. Laws are in place, laws are broken, child gets hurt. There is no excuse.

Putin talks about this moral erosion on an international scale too. The Red Scare is underway, but he questions why. Putin’s view is that Russia’s refusal to accept the US lead in transnationalism and thus surrender national autonomy, leads to the latest bogeyman persona the mainstream media have gifted him. It is the “moral crisis in the West” and its attempts to “remove institutions of international right and national sovereignty [via US Imperium]” for a more unified, unipolar world that create the morality problem. Putin’s speech is not far-fetched, though granted, on face value appears this way. Any attempts to alienate an ideal or nation starts with the stripping back of morals surrounding it. Domestically, its pedophilia, religious intolerance, or the rationalizing of other similar behaviors once deemed unacceptable. According to Putin, it then stretches outward in the form of conflict to those defiant of the new objectives.

Russia faces a bombardment of western criticism. And some of it is well deserved. However, it is difficult to ignore the validity of normalizing behaviors once unacceptable, that are now harming others. Where do you draw the line?

According to Putin, it is impossible to move forward without “spiritual, cultural and national self-determination'”

This article (Putin Accuses US of “Promoting the Propaganda of Pedophilia”) is a free and open source. You have permission to republish this article under a Creative Commons license with attribution to the author AnonWatcher and AnonHQ.com.