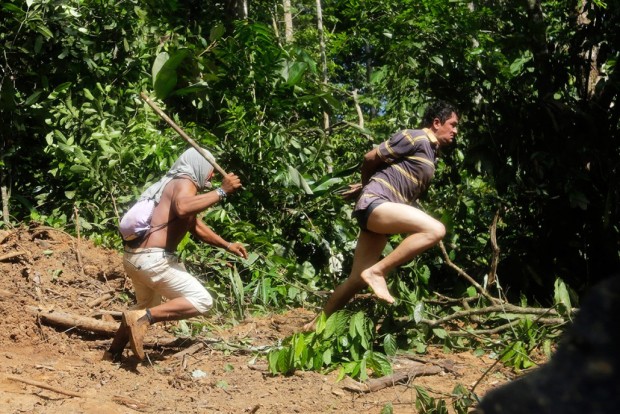 The Amazon forest in Brazil is under serious threat from illegal loggers. Some independent observers and environmental activists have said that the forest is likely to be completely destroyed if immediate steps are not taken to solve the situation.

But now, local vigilantes in the Alto Turiacu Indian territory known as the Ka’apor warriors have decided to help protect the forest from extinction by guarding their part of the forest from these loggers. The illegal loggers were using chainsaw machines and had already cut down many trees, and had prepared many of the logs for transport.

The Ka’apor men “arrested” them and tied them up, removed their trousers, leaving them with only their shirts, and subject them to severe physical punishment. The warriors beat them with sticks and confiscated the tools they had used to destroy the forest, including several machines. The illegal loggers had  also used trucks and other heavy machines such as bulldozers in their operations. All the heavy machines seized by the warriors were set ablaze, to indicate that they are indeed serious about protecting their forest. And these pictures were made possible by the photographer-Lunae Parracho, who had decided to follow the Ka’apor warriors during their jungle expedition in search of illegal loggers in the Alto Turiacu Indian territory in the Amazon basin. The warriors say that they are tired of what they had described as a ‘lack of sufficient government assistance in keeping loggers off their land’. The Ka’apor people and the other four tribes are the legal inhabitants and caretakers of that area of the forest. They have set up many monitoring camps in the forest to detect any move made by the illegal loggers. In 2014, the Brazilian government revealed that the annual destruction of its Amazon rain forest jumped by nearly 28 percent after four straight years of decline. Based on satellite images, it had estimated that 5,843 square kilometers of rain forest were felled in the one-year period since July 2013. The Amazon rain forest is considered one of the world’s most important natural defenses against global warming because of its capacity to absorb huge amounts of carbon dioxide. Rain forest clearing is responsible for about 75 percent of Brazil’s emissions, as vegetation is burned and felled trees rot. The warriors need to be commended for the risks that they have taken to save the forest. However, they still need more help. We encourage the Brazilian government to provide the warriors with the necessary support to fight these illegal loggers.