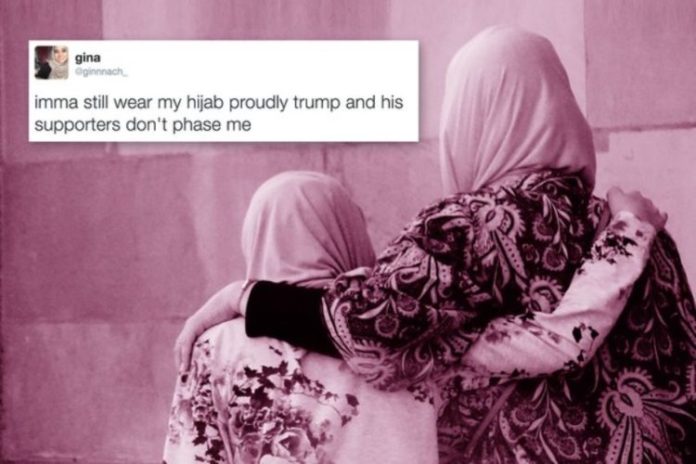 The rise of Islamophobia shouldn’t come as a surprise to anyone who has listened to the President-elect, Donald Trump, who hasn’t hidden his hate for Islam when contesting for the office he’ll soon occupy. Apart from banning Muslims from entering the United States, the new President-elect previously told his supporters that Islam hates Americans, claiming falsely and ignorantly that the religion is defined partly by tremendous hatred.

With no evidence whatsoever, Trump also claimed the mother of a Muslim American soldier killed in combat in Iraq, was not allowed to speak at the Democratic convention because of her faith.

And now that Trump has been elected as the next leader of the country, some sections of the United States Muslim community are fearing for their life.

My mom literally just texted me “don’t wear the Hijab please” and she’s the most religious person in our family….

The Independent reports that many Muslim women in the United States have taken to social media, telling the world how afraid they have become since the victory of Trump. The women mainly used Twitter to express their fear of wearing the hijab, after the triumph of Trump. The hijab is a head covering worn in public by Muslim women.

One woman revealed how her mother told her not to wear her hijab, for fear of racist reprisals. In fact, the tweets captured the sense of anxiety among Muslim women living in the United States. Many Muslims now fear Islamophobia will be exacerbated under a Trump leadership.

According to what we have gathered, since Trump started his Islamic bigotry, Muslims in the United States have come under physical attacks.

Although the media has refused to report many of these attacks, we published some of the hate crimes committed against Muslims in the country.

In September 2016, a few days before the celebration of Eid al-Adha, one of the holiest days for Muslims, a Muslim tourist from Scotland had her religious garb set on fire by an unidentified man in the middle of New York City.

According to the New York Police Department, the woman was window-shopping on Fifth Avenue near East 54th Street in Manhattan, while wearing her Islamic traditional religious attire, abaya and hijab. The abaya covers the whole of the body, except the face. All of a sudden, the woman started feeling heat on her body. When she turned to inspect her attire, lo and behold, it was on fire. She then saw a man standing next to her with a lighter in his hand. Before she could open her mouth, the man absconded without a trace. The woman was reportedly helped by people around, who put out the fire.

I am proud to be Muslim. I am proud to wear a hijab. I may be scared for my safety but I will not let myself fear him. #HesNotMyPresident

Some days before this incident, two Muslim women were reportedly attacked while walking with their children on a Brooklyn sidewalk in New York City. The attacker, identified as Emirjeta Xhelili, is said to have punched one of the women and attempted to remove her hijab while shouting, “get the f–k out of America. You don’t belong here.”  However, Xhelili was captured by the police. He has since been charged with two counts of felony assault as a hate crime, and two counts of acting in a manner injurious to a child. In the city of Orlando, Florida, police also investigated a possible hate crime, where a mosque was set on fire. The mosque set on fire is said to have been previously attended by the alleged Pulse Nightclub shooter, Omar Mateen.

A spokesman for the Washington-based Council on American-Islamic Relations said American Muslims told the Independent in an interview that Muslims in the United States are worried because of the disparaging statements Trump made against Islam.

“There are tremendous levels of fear given the anti-Muslim rhetoric we have seen from Donald Trump during this campaign. Now we have to wait and see if it was all an act or if he’s really going to carry out these bigoted policies.  We will continue to defend the civil rights of all American regardless of who is in office.”

A lot of people aren’t just heartbroken. They’re scared. It doesn’t feel safe to be gay/black/female/Muslim/Latino/Jewish in America tonight

According to observers, what is currently happening in the United States is what terrorist organizations, such as the so-called Islamic State of Iraq and Syria, want. The terrorists’ main goal is to stir reprisal attacks against Muslims in the West, in order to convince them [Western Muslims] that the West hates Islam.

This article (Report: American Muslim Women Afraid to Wear Hijab after Donald Trump Victory) is a free and open source. You have permission to republish this article under a Creative Commons license with attribution to the author and AnonHQ.com.