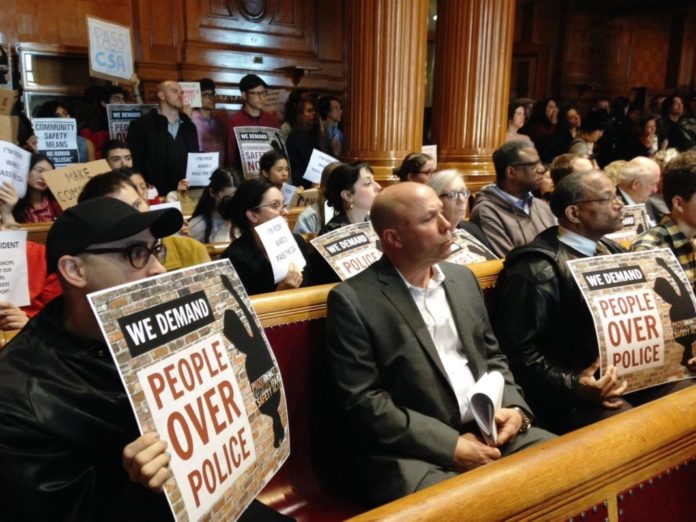 The Providence Rhode Island city council has delayed voting on a proposed anti-profiling measure after receiving a harsh letter from the local police union, who condemned it. The decision was met by boos from the crowd and celebrations from law enforcement, who are completely content with the status quo.

The council has already voted and approved the measure that would change how police interacted with the public. They were prepared to approve it in a second and final vote, however, due to the mounting pressure from the local law enforcement community, the vote was delayed until June. The council hopes to “acquire more input” on the proposition, however, the pressure from the police union isn’t likely to let up. The letter from the Fraternal Order of Police stated in no uncertain terms that the new ordinance was an obstacle to police. “The passage of the community safety act is unnecessary and unjust. It is a slap in the face to the men and women of the Providence Police Department and counterproductive to the safety of Providence.”

The council has responded and it doesn’t seem that they care what the FOP had to say. It is curious that they delayed the vote, as none of the 12 Democratic council members opposed the measure.

“We were never under the delusion that 100 percent of people would agree,” Luis A. Aponte told the media.

Aponte is the council president, and according to Aponte, the union never showed up to any of the hearings in regards to the issue, nor did they object prior to the first vote. The timing of the objection makes it appear to be political stalling on behalf of the union, who should have mounted an opposition months ago – if the issue truly mattered to them.

The bill itself was intended to end racial profiling in police practice in Providence. The changes would require officers to file additional paperwork, depending on the type of stop they made. It would also make adding a name to the department’s gang database require permission of the person being labeled a gang member. The department told the council that they were already working to make changes within the department and that the new ordinance would undermine their ability to do so. The reality is that police just don’t like anyone telling them what to do.

The biggest change that the police union objected to was the Providence External Review Board now having the ability to review all police contacts, arrests and budget data and make their own recommendations. Police simply want as little oversight as possible but the reality is that those days are coming to an end. Local governments are catching on to the corruption that is prevalent is nearly every city and town across America, and they are doing their best to put an end to it.

This article (Rhode Island City Council Caves to Police Pressure – Delays Implementation of Police Reforms) is a free and open source. You have permission to republish this article under a Creative Commons license with attribution to the author and AnonHQ.com.